Rajouri area remained the region of great importance in ancient times. In Mahabharta there was a kingdom known as Panchal Desa. The king of this State was Panchal Nareshwhose daughter Dropdi was married to Pandvas. The Historians Identify Panchalya Desha as the region in Panchal range of mountains. Rajouri was also a part of this kingdom of Panchal Naresh.

Rajouri, then known as Rajapuri – ‘the land of Kings’ – finds its mention in the travelogue of Chinese traveler Hiuen Tsang who visited the town in 632 A.D. and described it as a part of Kashmiri dominion. Still earlier in the Buddhist period it formed a part of Gandharterritory (Afghanistan, Gandhar and Tashkent) and later was included in the domain called Darabhisanga which comprised the hilly stretch from Poonch to Kashmir. Those days Laharkote in Poonch district and Rajouri had emerged as two powerful states of the area.

According to F.E.Pargitor, second branch of Aryan emigrants crossed Himalayas in the north and west and settled in Rajouri and Poonch area. Rajouri, Bhimber and Naushera were included within the territory of Abhisar, which was one of the hill states of Punjab Kingdom. Early records of fragmentary nature show that in 4th century B.C. there existed in the north west of India a federal type of political set up in which Abhisar with its capital Rajouri was also included. At the time of Alexander’s invasion, Rajouri was at the height of its glory. In Mauryan period, the town of Rajouri was a great trade centre. During the Mughal rule, the rulers of Rajouri have embraced Islam though they retained the title of Raja.

Albaurni visited Rajouri with Sultan Masud (Son of Sultan Mehmud) in 1036 A.D. In his book “India” he wrote name of Rajouri as Raja Vari. Srivar, the writer of ‘Raj Tirangini’ written during the regime of Sultan Zain-Ul-Abdin, also named this area as Raja Vari. It appears that Raja Vari is the changed shape of Raj Puri. Praja Bhat another writer of Raj Tirangini of 16th century A.D. wrote this place as Raj-Vare in his book. Mirza Zafarulla Khan writer of ‘Tarikh Rajgan-E-Rajour’ described in his book that this place was originally known as Raj-Avar and then changed from Rajour to Rajouri. But the old people in the villages still call the place as Rajour. With the passage of time the name changed from Raja’s Raj Avar to Raja Puri, Rajpuri to Raj Vari, Raj Vari to Raj Vara, Raj Vara to Raj Avar, Raj Avar to Rajour and then Rajour to Rajouri. As per Rajtirangini of Kalhan, Rajouri emerged as principality in about 1003 A.D. The first ruler of this kingdom was Raja Prithvi Paul. From 1033 A.D. to 1194 A.D. these Pauls ruled this state. They were Raja Prithvipaul, Raja JankiPaul (1035 A.D.), Raja Sangram Paul (1063 A.D.), Raja Som Paul (1101 A.D.), Bahu Paul (1113 A.D.) and AmnaPaul (1194 A.D.). Raja Prithvi Paul defeated Pir PanchalPass at the time of invasion of Sultan Mehmud in1021 A.D. Raja Sangram Paul defended his Principality Rajouri when Raja Harash of Kashmir assaulted his country in 1089 A.D. Sangram Paul fought so bravely that Raja Harash was compelled to return from Prithvi Paul fort without capturing Rajouri

Jaral Muslim Rajas rebuilt Rajouri city during their rule. Number of Fort, Sarai, Mosque and Baradaries were constructed with the help of Mughals, on Mughal road. The area of Rajouri principality comprised proper Rajouri, Thanna, Bagla Azim Garh, Darhal, Behrote, Chingus, Nagrota and Phalyana etc. The total revenue of Rajouri was Rs.3.00 lacs in 1846. Raja Aggar Ullah Khan (1808-1819) fought bravely, first against Maharaja Ranjit Singh in 1815 and then Raja Gulab Singh in 1819. These Muslim Rajas were very liberal and accommodating. Raja Azmat Ullahwas having Hindu Minister of Mehta family of Rajouri. Hindu Rajputs were given preference at the time of employment in armed forces. 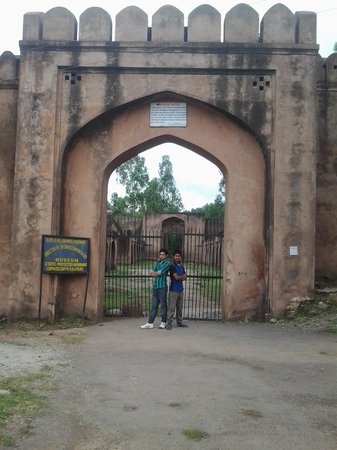 The successive Rulers were also responsible for the proper upkeep of Mughal route from Gujarat to Kashmir, dotted by a dozen stations in between. The town also called Rampur as per the revenue document, gained popularity during the Mughal period as the Mughal Ruler, during their movement from Delhi to Kashmir and back, used to stay at the station for some time.

After taking the charge of Rajouri from Raja Faqir Ullah in 1846, Maharaja Gulab Singh changed the name of Rajouri to Rampur. He appointed Mian Hathu as Governor of Rajouri. Mian Hathu remained in Rajouri upto 1846 A.D. He constructed a beautiful temple in between ThannaNallah near Rajouri city. He also built Rajouri Fort at Dhannidhar village. After Mian Hathu, Rajouri was converted into a Tehsil and affiliated with Bhimber District. In 1904 A.D., this Tehsil was bifurcated from Bhimber and affiliated with Reasi District. After Independence, Rajouri became part of the newly constituted Poonch-Rajouri District. On Ist January 1968, Rajouri emerged as a new District on the map of the State.