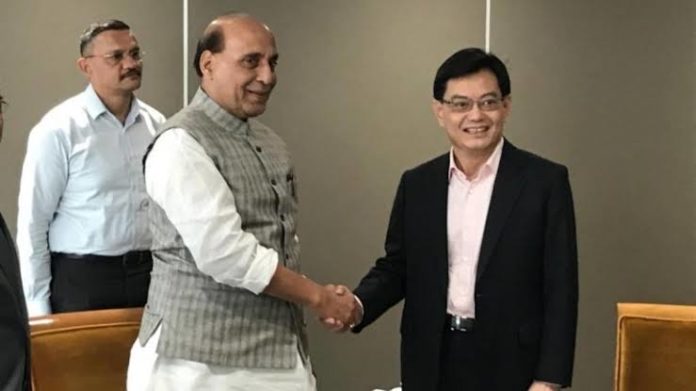 Defence Minister Rajnath Singh held talks with Singapore’s Deputy Prime Minister Heng Swee Keat here on Tuesday during which the two leaders agreed to take the defence cooperation between the two countries to greater heights.
Singh expressed satisfaction at the increasing engagement of the armed forces of India and Singapore in conducting joint exercises, a government release said. During the meeting, Singh also referred to India’s stand on the South China Sea and the Indo-Pacific region, stressing that India is for an open, inclusive and stable Indo-Pacific connected through secure seas, integrated by trade and anchored by the unity and centrality of ASEAN.
The Defence Minister reiterated India’s stand that the implementation of international laws and norms, freedom of navigation, unimpeded lawful commerce and peaceful settlement of disputes is the only way to ensure a rule-based order in the Indo-pacific region.
He conveyed Keat that the vision of India’s comprehensive agenda of regional cooperation is rooted in ‘SAGAR’ (Security and Growth for All in the Region’). Singh also communicated India’s stand for not joining the Regional Comprehensive Economic Partnership (RCEP).