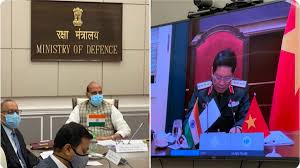 Union Defence Minister Rajnath Singh assured Vietnam of India’s help in modernisation of its armed forces, with a focus on enhancing maritime capabilities, as both sides work on a new joint vision statement, ThePrint has learnt.

India has been in talks with Vietnam, which has maritime border issues with China in the South China Sea, over Hanoi’s interest in acquiring the Indo-Russian supersonic cruise missile BrahMos.

Defence sources said Vietnam is keen on acquiring a host of military equipment, including India’s Akash air defence system and the Dhruv helicopters, besides the BrahMos.

According to sources in the know of bilateral discussions held Friday, Singh told his counterpart that defence cooperation has been one of the most significant pillars of the Comprehensive Strategic Partnership initiated by the two countries in 2016.

Both countries, the sources added, are committed to maintenance of security and stability in their countries, the region and also addressing non-traditional security threats.

“India remains committed to the modernisation of Vietnamese armed forces,” Singh was quoted as saying.

The World This Week: The Joshua Wang trial in Hong Kong, and a worsening conflict in Ethiopia
MARCOS deployed near Pangong Lake in eastern Ladakh, naval commandos to get new boats soon
Comment