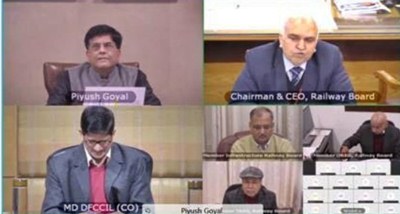 PiyushGoyalMinister of Railways Piyush Goyal reviewed the progress of various sections under completion in Dedicated Freight Corridor -DFC on both East and West corridors. During the meeting, Mr Goyal said that no stone should be left unturned in ensuring that completed project is handed over to the nation by June 2022.

‌When apprised about the challenges being faced by the Railways in getting work completed in certain sections ahead of the schedule, the Minister said that everything  would be done to bring all stake holders on board to ensure that work is completed in sync with June 2022 deadline.

In the first phase, Dedicated Freight Corridor Corporation of India Limited is constructing the Western DFC of 1504 kilometer Route and Eastern DFC of 1856 Kilometer route including PPP section of Sonnagar-Dankuni Section.