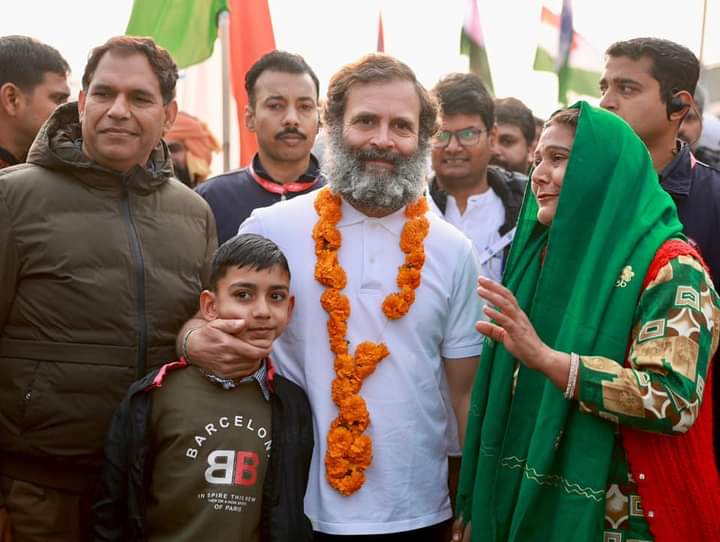 The yatra started from Samba’s Vijaypur along the Jammu-Pathankot highway at around 7 am Monday and was received warmly by a massive crowd as it crossed Bari Brahmana in Jammuj’s Parmandal.

Earlier, officials said all necessary arrangements were in place for the yatra, which started from Kanyakumari on September 7 and is scheduled to culminate in Srinagar, Jammu and Kashmir’s summer capital, on January 30. Gandhi is scheduled to hoist the national flag at his party headquarters at a mega rally to mark the culmination of the march.

Amid chants of ‘Nafrat Chhodo, Bharat Jodo (essentially denouncing hatred to unite India)’, the yatra witnessed a huge number of policemen joining the security ring around the Gandhi family scion at Kaluchak as it moved ahead towards its Satwari Chowk.

Gandhi will address a gathering at the Satwari Chowk before moving to Sidhra for the night halt.

They were joined by a large number of party workers and supporters who were walking with the tricolour.

Thousands of people have gathered to receive the march at Kunjwani, where a large delegation of Peoples Democratic Party (PDP) led by General Secretary (central) S Amreet Singh Reen were waiting to join the yatra.

“We have come to support Gandhi who is moving with a message to strengthen the unity and remove hatred in the country,” senior PDP leader and former legislator Firdous Ahmad Tak said.

He said the beauty of the country is ‘unity in diversity’ and such an initiative was the need of the hour in view of the “massive onslaught unleashed by the ruling dispensation” on the country’s social fabric.

“Gandhi was able to convey his message in a powerful way across the country and even those who are not able to participate in the yatra are appreciating his message,” he said.

Congress working president thanked the people for their tremendous response to the yatra. “Not only the Congressmen but the common people are joining the yatra and sharing the concerns raised by Gandhi over the divisive politics prevalent in the country.” He said people are very happy with Gandhi who is listening to their issues which is very important.

“Former Prime Minister Indira Gandhi was known as Kashmir’s daughter and her grandson is on a foot march to Kashmir…there are various issues and the foremost is the restoration of our rights including full statehood and holding of elections,” he said.

Earlier in Samba, Gandhi, who walked wearing his trademark white T-shirt braving the early morning chill, was cheered on by the public and party workers waiting in their numbers on either side of the road.

He was seen moving close to the roadside to shake hands with the enthusiastic supporters at a few places, much to the concern of the security personnel.

Traffic police have issued a detailed advisory for Monday and Tuesday to ensure the smooth movement of traffic on the highway and other link roads in the city.

Security has been beefed up across the Union Territory in the wake of two bomb blasts in the Narwal area on the outskirts of Jammu city on Saturday which resulted in injuries to nine people.

The blasts were triggered by suspected terrorists, who acted despite the heightened security arrangements made ahead of the Gandhi-led yatra and the Republic Day celebrations. (PTI)