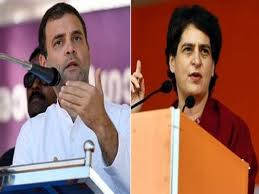 Congress leader Rahul Gandhi and Priyanka Gandhi Vadra on Monday urged people to join the “Speak Up for Farmers” campaign, amid farmers’ protests against the Central government’s new farm laws.

“Modi government tortured farmers- first they brought in black laws and then used force/lathi-charged farmers. But they forgot that when farmers raise their voice then it resonates across the country. Join us through the #SpeakUpForFarmers campaign against the exploitation of our brother farmers,” read Rahul’s tweet (roughly translated from Hindi).

Raising the issue, Priyanka Gandhi Vadra alleged that the interests of farmers were ignored in new agricultural laws.

“Name of the law is farmer’s law but all the benefit to billionaire friends. How can farmer laws be made without talking to farmers? How can the interests of farmers be ignored while making these laws? The government will have to listen to the farmers. Let us together raise our voice in support of farmers. #SpeakUpForFarmers,” she tweeted in Hindi.

Farmers have been protesting at various places in Delhi and Haryana and have rejected the central government’s offer to hold talks on December 3 saying that imposing conditions for starting a dialogue is an insult to them.

Around 32 farmer organisations, mostly from Punjab, and a few farmers from Gujarat and Maharashtra as well managed to reach Delhi on Friday and assembled at the border areas to continue their protest.

The farmers are protesting against The Farmers’ Produce Trade and Commerce (Promotion and Facilitation) Act, 2020, The Farmers (Empowerment and Protection) Agreement on Price Assurance and Farm Services Act, 2020, and The Essential Commodities (Amendment) Act, 2020.

Union Agriculture Minister Narendra Singh Tomar has said that the Central government is ready for talks with the farmers’ unions on December 3.