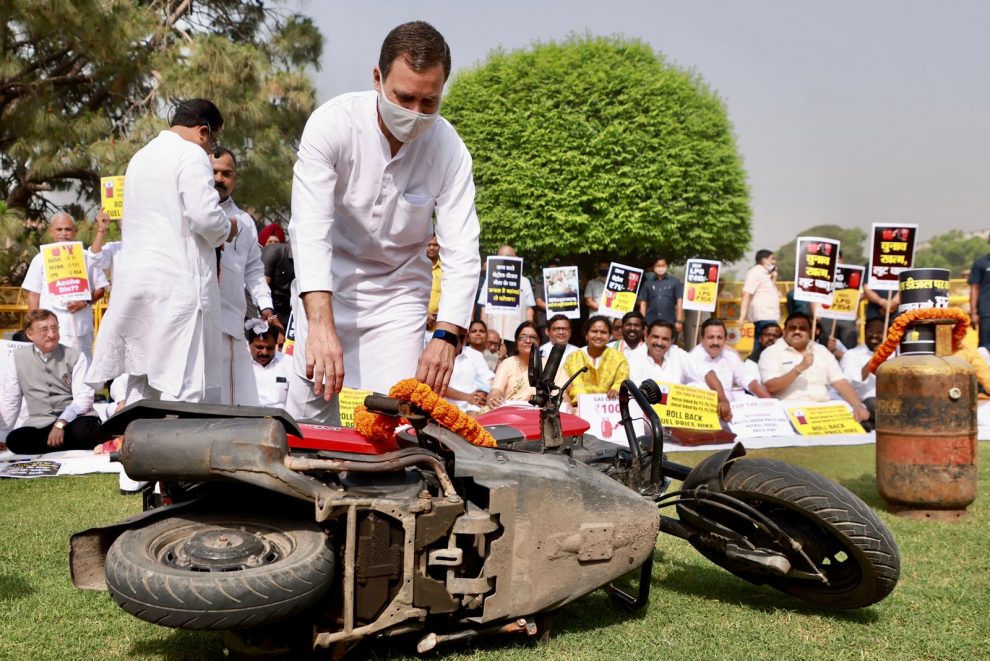 New Delhi: Stepping up the attack against the government over steep hike in fuel prices, Congress leader Rahul Gandhi on Thursday said the rise in petrol and diesel prices has been unprecedented and demanded its roll back.
Leading a protest by Congress MPs on the issue at Vijay Chowk here, he said prices of petrol and diesel have risen nine times in the last 10 days, and the common man is the most affected due to this.

“Our demand is that the government should control prices and stop raising petrol and diesel prices,” Gandhi said while noting that the poor and middle class have been worst hit by the hike.

“I had said that when elections will be over, the prices of petrol and diesel will be rising and had asked people to fill up their tanks,” he said.

This level of price rise in petrol and diesel has been unprecedented, he said while accusing the government of stealing the money from the poor and handing it over to industrialists.

The Congress is also launching a week-long countrywide protest against inflation and rise in fuel prices.

Petrol and diesel prices were on Thursday hiked by 80 paise a litre each, taking the total increase in rates in the last 10 days to Rs 6.40 per litre.

Rates have been increased across the country and vary from state to state depending upon local taxation.

This is the ninth increase in prices since the ending of a four-and-half-month long hiatus in rate revision on March 22.