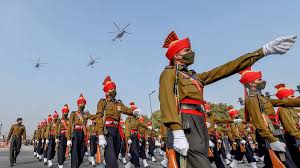 “They have been adjudged on the basis of the assessment of the panels of judges and the results of the competitive presentation of the contingents,” the Ministry said in a release. Three panels of judges were appointed for assessing the performance of marching contingents from three services, marching contingents from CAPFs and other Auxiliary Forces, and tableaux from various states and Union Territories (UTs), Central Ministries, their departments, and from CAPFs and other auxiliary forces, along with the performances of school children, it said.

Among the tableaux of states and UTs, Uttar Pradesh, Tripura, and Uttarakhand were chosen first, second and third respectively. Department of Biotechnology was chosen as the best tableau among the Central Ministries, their departments, CAPFs, and other auxiliary forces. A special prize was also given to the tableau of the Central Public Works Department (CPWD).