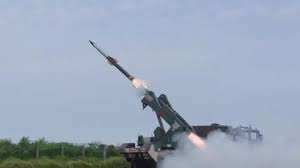 The QRSAM weapon system, which operates on the move, comprises of fully automated Command and Control System, Active Array Battery Surveillance Radar, Active Array Battery Multifunction Radar and Launcher.Both radars are four-walled having 360-degree coverage with a search on move and track on move capability.

The system is compact with a minimum number of vehicles for a firing unit. The single-stage solid propelled missile has a midcourse inertial navigation system with two-way data link and terminal active seeker developed indigenously by DRDO.The missile successfully engaged the aerial target establishing its capability. Director General (Missiles and Strategic Systems) MSR Prasad was present during the trial.

With this mission, the developmental trials of the weapon system are successfully completed and the weapon system is expected to be ready for induction by 2021.Defence Minister Rajnath Singh and Chairman DRDO Dr G Satheesh Reddy have congratulated the teams involved in the flight trials and development of QRSAM.