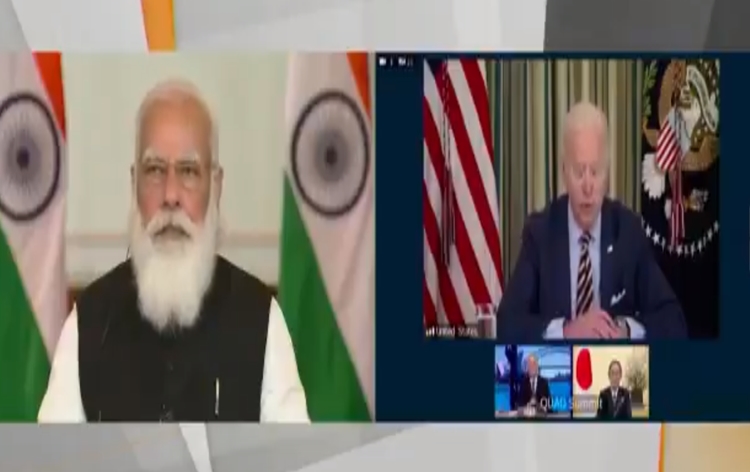 Quad countries have expressed commitment to promoting a free, open rules-based order, rooted in international law to advance security and prosperity in the Indo-Pacific and beyond. The Quad Leaders in a Joint Statement issued after the first ever Quad Summit yesterday, said they support the rule of law, freedom of navigation and overflight, peaceful resolution of disputes, democratic values, and territorial integrity. They reaffirmed strong support for ASEAN’s unity and centrality as well as the ASEAN Outlook on the Indo-Pacific.

The Joint Statement said the Quad seeks to uphold peace and prosperity and strengthen democratic resilience, based on universal values. The Quad leaders reaffirmed commitment to quadrilateral cooperation between Australia, India, Japan, and the United States. They stated that they are united in a shared vision for the free and open Indo-Pacific. The Quad leaders said they strive for a region that is free, open, inclusive, healthy, anchored by democratic values, and unconstrained by coercion.

They pledged to strengthen cooperation on the defining challenges of the time. They also pledged to respond to the economic and health impacts of COVID-19, combat climate change, and address shared challenges, including in cyber space, critical technologies, counterterrorism, and quality infrastructure investment. The Quad leaders stated that they will join forces to expand safe, affordable, and effective vaccine production and equitable access. They agreed to collaborate to strengthen equitable vaccine access for the Indo-Pacific, with close coordination with multilateral organizations including the World Health Organization and COVAX.

They called for transparent and results-oriented reform at the World Health Organization. They said they are united in recognizing that climate change is a global priority and will work to strengthen the climate actions of all nations, including to keep a Paris-aligned temperature limit within reach.

The leaders said they will continue to prioritize the role of international law in the maritime domain, particularly as reflected in the United Nations Convention on the Law of the Sea (UNCLOS) and facilitate collaboration. This includes maritime security, to meet challenges to the rules-based maritime order in the East and South China Seas.

They also reaffirmed commitment to the complete denuclearization of North Korea in accordance with United Nations Security Council resolutions, and also confirmed the necessity of immediate resolution of the issue of Japanese abductees. As long-standing supporters of Myanmar and its people, the Quad nations emphasized the urgent need to restore democracy and the priority of strengthening democratic resilience.

President Kovind to be on 3-day visit to Purvanchal in Uttar Pradesh from today
Vice President calls for concerted efforts to eradicate poverty, illiteracy, corruption and social evils
Comment