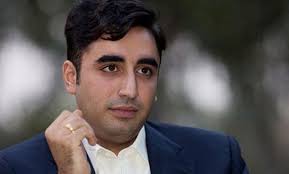 Slamming the Imran Khan-led PTI government, Pakistan People’s Party (PPP) chairperson Bilawal Bhutto Zardari said that the “puppet regime of political orphans” was crumbling.Making the statement while addressing a public rally held at Liaquat Bagh to mark the 12th death anniversary of former prime minister Benazir Bhutto, who was assassinated in a gun-and-bomb suicide attack during a PPP election rally in 2007 in the same area.

Bilawal asserted that he would complete the unfinished mission of his mother and ensure people were given their due rights. He said that there exist a leadership and economic crisis in Pakistan as political orphans were ruling the country, Geo News reported.

“These are the same political orphans Benazir warned you about. Look at how they conduct their politics. They are cowards,” he was quoted as saying.Continuing his tirade against the PTI government, the PPP chairperson said that the claims made on opposition politicians had proven false.

“They said Mian sahab (Nawaz Sharif) will never go abroad for treatment. But Mian sahab went abroad for medical treatment. They said President (Asif Ali) Zardari will never come out of jail. He is out of jail now too,” he said.Bilawal appealed to the people to support him in ousting “this government of selected and political orphans as the people’s rule cannot be established without the PPP”.

Bilawal credited his grandfather, Zulfikar Ali Bhutto, also the country’s former prime minister, for ensuring rights given to the labourers during his tenure. He added that his mother had fought two dictators during her lifetime and never backed down from anyone.

“You (people) are witness that they (political rivals) used to say a woman can never be the prime minister of a Muslim country. You saw how she became the first female head of state of a Muslim country,” said the PPP chairperson.Accusing the incumbent government of being an enemy to the poor people of Pakistan, Bilawal criticised “those in corridors of power” for removing women beneficiaries of the Benazir Income Support Programme (BISP) from its list and declaring them “undeserving”.

“This is not the independence that Quaid-e-Azam Muhammad Ali Jinnah gave us. We will build the Pakistan that Benazir envisaged for you,” he further said.