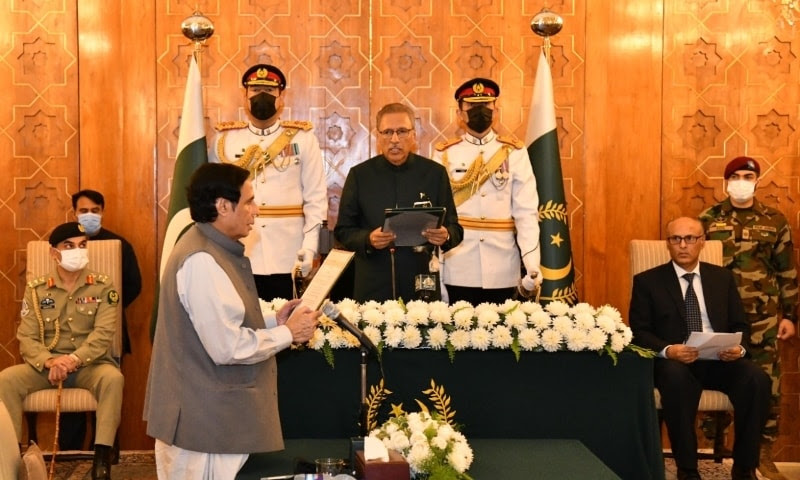 Joel Jacob
Add Comment
Elahi started his political career in the local body elections and got elected as a member of the Punjab assembly for six consecutive terms during 1985 -2002. After the 1985 party-less elections, he had set up a group against the then chief minister Nawaz Sharif on account of differences on various issues. The initiative led to permanent distrust between the Chaudhrys and the Sharifs, although they have been working together till the ouster of the PML-N government in October 1999.

On 27 July, following the Supreme Court’s intervention, Chaudhry Parvez Elahi was sworn in as Chief Minister of Punjab. Elahi secured 186 votes against 179 votes of Hamza Shehbaz but was denied becoming the Chief Minister first. The Deputy Speaker rejected the ten votes of PML-Q lawmakers, following the party chief’s instruction Chaudhry Shujaat Hussain through a letter directed his party lawmakers to vote for Hamza.
The Supreme Court, in an 11-page  order, said: “We find that the understanding and implementation of the said short judgment as well as the provisions of Article 63A(1)(b) of the Constitution by the Deputy Speaker, Provincial Assembly of Punjab, Lahore was patently incorrect and erroneous and cannot be sustained.” As a result, the ruling by the Deputy Speaker of the Punjab Assembly is set aside and declared to be void. Elahi became Punjab’s 19th Chief Minister.

Who is Parvez Elahi? What is his background?
Parvez Elahi belongs to a Punjabi Jatt family of Gujarat to the industrialist Chaudhry Manzoor Elahi Warraich. Manzoor Elahi, along with his brother Chaudhry Zahoor Elahi owned a textile business in Gujarat and established two textile units – Gujarat Silk Mills and Pakistan Textile Mills. In 1950, the business expanded to Lahore where they established Parvez Textile Mills. After the death of the elder Elahi brothers, the family business was taken over by Parvez Elahi and his brother Javed Elahi in Pakistan. Parvez Elahi holds a diploma in industrial management.Elahi’s cousin, former Prime Minister Chaudhry Shujaat Hussain did not interfere in business and engaged in active politics.

Elahi started his political career in the local body elections and got elected as a member of the Punjab assembly for six consecutive terms during 1985 -2002. After the 1985 party-less elections, he had set up a group against the then chief minister Nawaz Sharif on account of differences on various issues. The initiative led to permanent distrust between the Chaudhrys and the Sharifs, although they have been working together till the ouster of the PML-N government in October 1999.

Elahi with Musharraf and PPP
Soon after Pervez Musharraf toppled the PML-N government in the 1999 military coup, a group of the former ruling party emerged as the ‘likeminded’ faction. The group later turned into the PML-Q. After the coup in 1999, the Chaudhrys grabbed the opportunity when Musharraf offered the two Chaudhry brothers key positions, interior and chief minister Punjab under a new party, the PML-Q.
After the exit of Nawaz Sharif’s family from the country in 2000, Chaudhary Shujaat Hussain emerged as the principal actor. In 2008, the PML-Q leader was made the Leader of the Opposition in the National Assembly.
In 2011, the PML-Q entered into an alliance with PPP, a longstanding demand of the party was fulfilled and Elahi was awarded the post of deputy prime minister.

The PTI-PMLQ coalition in 2018
In the 2018 senate elections, PTI agreed with PML-Q to win the elections and the PTI emerged as the single largest party but short of a majority in the National Assembly. By gaining the support of a number of independent candidates and smaller parties like PMLQ, BNP-M, BAP, and MQM, the PTI was able to form a government without PPP’s support. Elahi said the PTI has nominated him as a joint candidate for chief minister in Punjab. Nawaz Sharif accepted the condition of PML-Q over the Punjab Chief Minister slot. The proposal, which was earlier rejected, has been taken to get the support of the government ally on the no-confidence motion against Prime Minister Imran Khan.

Rift within the Chaudhry Family
On 29 March, Shujaat Hussain denied reports of a rift within the Chaudhry family and the party, saying all decisions taken had his “complete backing”. The statement came in the wake of his party’s deal with the ruling PTI as Imran Khan agreed to give the coveted slot of the Punjab chief minister to  Elahi in return for the support on the no-confidence motion submitted by the opposition. Initially, Shujaat supported Elahi but later withdrew his support stating that he differs from the state institutions The efforts to bring the Chaudhry brothers of Gujarat back on the same page did not find the result as the sons of  Shujaat declared they will maintain their alliance with the party of the Sharifs. Salik Hussain and Shafay Hussain gave full support to Hamza Shahbaz and to the PML-N-led federal government and reassured them that their political alliance would continue in the future as well.

PML-Q workers have staged a protest against Shujaat over his decision not to vote for Elahi during the Punjab election. After the election of PTI-backed candidate Elahi as Punjab Chief Minister, PML-Q decided to remove Shujaat and hold a fresh election for the seat stating his ill health, but on the basis of Shujaat filing a case in Election Commission on 5 August, he said he would remain the PML-Q president until the next hearing.

Join The Dispatch Whatsapp Group to stay updated
The Dispatch is present across a number of social media platforms. Subscribe to our YouTube channel for exciting videos; join us on Facebook, Intagram and Twitter for quick updates and discussions. We are also available on the Telegram. Follow us on Pinterest for thousands of pictures and graphics. We care to respond to text messages on WhatsApp at 8082480136 [No calls accepted]. To contribute an article or pitch a story idea, write to us at [email protected] |Click to know more about The Dispatch, our standards and policies
TagsNIAS Bangalore Parvez Elahi The Dispatch

The Grass and the Mountain are always greener on the other side of the Elderly Care: An Exploration of Elderly Care through a travelogue and ethnography
Why Kashmir did not participate in the war of Mahabharata?
Comment