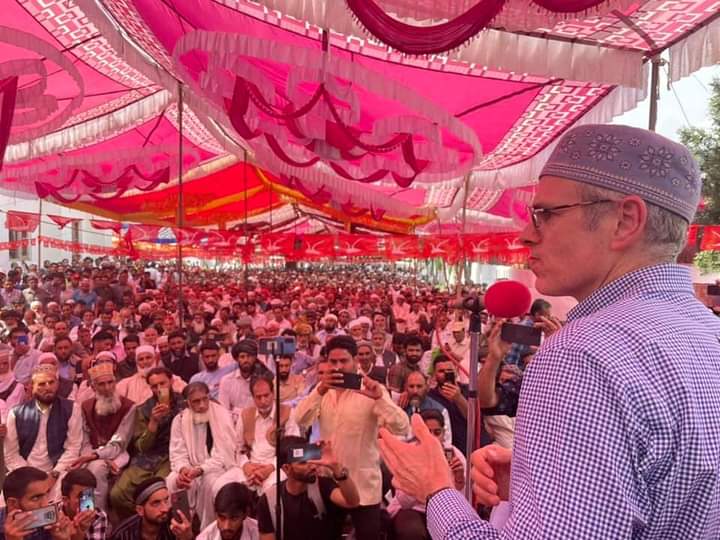 JAMMU: Criticizing the Bharatiya janta party (bjp) for not brought any changes in jammu and kashmir after the abrogation of article 370, National Conference (NC) vice president and former chief Minister of j&k Omar abdullah Lashed out at the Bjp Government for not taking any appropriate Steps to address the Unemployement in jammu and kashmir. He Said that if National Conference did nothing for the educated youth of jammu and kashmir, Now you should provide employement opportunities to unemployed youth, if you are really very much Serious about youth ” Omar asked Bjp Government”.

Addressing a huge gathering Here at Dak-bungalow ground mendhar, the Former chief Minister of j&k Omar Abdullah Said that said that due to the anti-people policies of the Govt that today unemployment is at its peak, inflation has gone out of control amid the sky rocketing prices of essential commodities while the claims of unprecedented development stand exposed with the snail’s pace of almost all the works.

He Said that in pir-panjal twin district of Rajouri and poonch, false propaganda is being spreading among people of Pahari Community that National Conference did noting for them which is totally baseless, not based on facts, we did as much possible we can. Omar abdullah Said that date’s back in the year 2002 when i visited first time in Surankote to address my first public gathering i Remember, ” i Said that we have given to Gujjars Bakerwals their due rights which is a good, but i also said at that time pahari also deserve Their Rights, we want to do something for them and give them their rights, but i also said that pahari ki thali ma unka haq dene k Liye Gujjaron ki thali ma chaad (hole) krna ye munasib nhi ha. Omar Said that i Stand by these Lines Since 2002 till now.

He said that Every community deserves their due rights but to give justice to one community by snatching rights of other community is not possible. He Said that National Conference has been strongly pleading for the grant of Scheduled Tribe status to Pahari speaking people without disturbing the reservation quota already granted to other communities.

Senior NC Leader and Former Mla mendhar javed ahmed Rana while addressing gathering Said that National Conference always talked about the people of jammu and kashmir and their development. He Said it was omar abdullah Led National conference government which gave all section of Society their due benefits Beside creation of OBC and kisaan Board. Javed Rana remined people about the historic works done and creation of administrative units particularly in mendhar sub-division which includes blocks, niabat, tehsils besides opening of educational institutions in the area’s during the omar abdullah led NC government.

Senior NC leader javed Rana said that, ” Hindu muslim sikh ithaad zindabaad zindabaad is the slogan of National conference. In the National Conference party everyone is equal irrespective of caste, creed and religion, we believe unity in diversity, ” Rana added”.