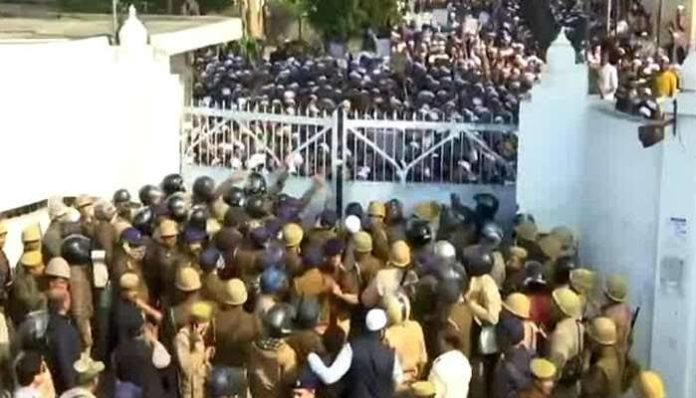 Protests broke out at Nadwa College in Lucknow against the Citizenship (Amendment) Act on Monday, a day after violent demonstrations in the Jamia Millia Islamia (JMI) University area.
The student protesters pelted stones at the police party as they were contained within the college premises after cops closed the entrance from outside. Agitators raised slogans in support of Jamia students. Police, however, claim that the situation is normal and students are returning back to their classrooms.
“There was stone pelting for about 30 seconds when around 150 people had come out to protest and raise slogans. The situation is normal now. Students are going back to their classrooms,” said Kalanidhi Naithani, Superintendent of Police, Lucknow.
The Citizenship Act seeks to grant Indian citizenship to refugees from Hindu, Christian, Sikh, Buddhist and Parsi communities fleeing religious persecution from Pakistan, Afghanistan, and Bangladesh and who entered India on or before December 31, 2014.The Citizenship (Amendment) Bill was passed by the Parliament earlier this week and became an Act with President Ram Nath Kovind giving his assent on November 12.