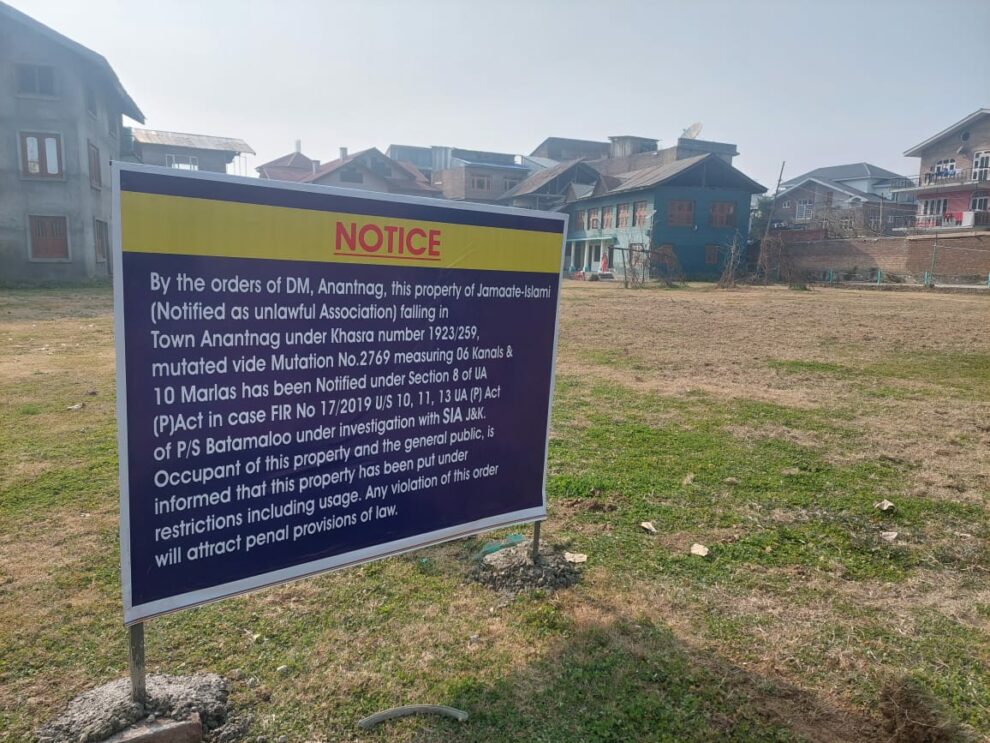 SRINAGAR: SIA has discovered further assets of banned Jamat-e-Islami throughout UT of J&K worth crores of INR.

Today in District Anantnag properties at eleven locations worth more than 90.00 crores INR after being notified by DM Anantnag on the recommendation of SIA J&K have been barred with restrictions on usage and entry, SIA said in the statement.

To choke the availability of funds for secessionist activities and to dismantle the ecosystem of anti-national elements & terror networks hostile to India’s sovereignty, the following properties belonging / held by banned JeI J&K in District Anantnag of South Kashmir have been notified by District Magistrate Anantnag vide Notification No. DCA/SQ/22/6033-50 dated 24/11/2022 followed by administrative order No DCA/SQ/22/6051-66 dated 25/11/2022 in exercise of powers conferred by section 8 of the Unlawful Activities (Prevention) Act, 1967 & Notification No. 14017/7/2019, dated 28-February- 2019 of Union Ministry of Home Affairs.

These premises/ structures have been barred and entry and usage has been prohibited reads the notification. Besides “Red entry” to this effect has been made in the relevant revenue records.

2. Orchard land measuring 30 Kanals & 01 Marla in village Rakhi Moman Danjipora under survey No. 649/195 mutated in the name of Jamaat-i-Islami vide mutation No. 246.

5. Double-storey residential house over land 12 Marla in village Anantnag East Mattan under Survey No. 797 mutated in the name of Jamat-i-Islami vide mutation No. 2222.

9. Gair Mumkin Kuthar over land 04 Sarsai in village Shangus under survey No. 745 min in the name of Jamat-i-Islami through Gh. Nabi (Gul Shah) and others vide mutation No. nil

10. Under construction seven shops and 04 rooms over land 01 Kanal, 05 Marla near Iqra English Medium School in village Viddy Srigufwara under survey No. 235 min.

Anantnag properties of JEI are the 2nd set of properties to be notified in a series of properties belonging to Jamaat-e-Islami in other districts of UT of J&K. This has a lot of significance vis a vis Jamaat activities. This will end up in crescendo, as the fight against terror networks, unlawful association’s progresses.

The action would uproot the menace of terror funding to a great extent in UT of J&K besides being a stepping stone in ensuring rule of law & a society without fear.

Pertinently SIA has identified as many as 188 JeI properties across UT of J&K which will be notified during the further course of action to be undertaken. These are as a result of investigation of case FIR number 17 of 2019 U/S 10, 11 & 13 of police Station Batamaloo being investigated by SIA.

SIA has preliminarily identified numerous properties purchased or acquired by JeI worth hundreds of crores of rupees.

In the 2nd phase, after verification on ground, SIA choose district Anantnag, the district with maximum Jamaat penetration and after confirming that eleven different landed and in some cases land-Cum-house properties are indeed under JeI ownership or control, SIA submitted evidence before the District Magistrate of Anantnag who has expelled the JeI from entering or using these eleven properties under section 8 of UAPA.