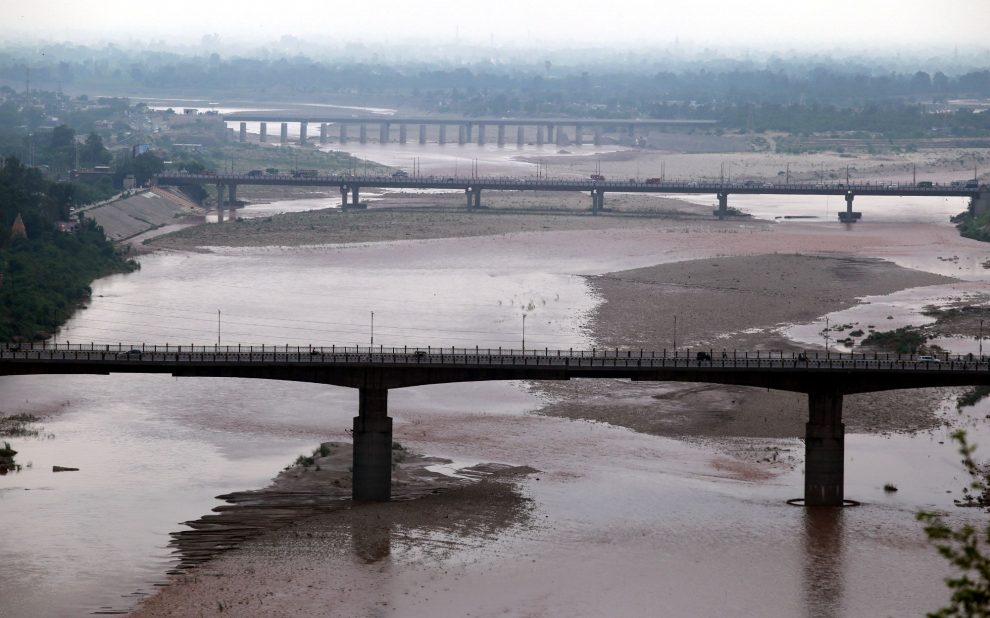 Jammu: The much-hyped project for development of River Tawi front on the pattern of Sabarmati River front in Gujarat has been failed to take off in Jammu city.

Moreover, nobody in the Housing and Urban Development Department and Jammu Development Authority is in a position to spell out whether the project aimed at promotion of tourism will ever become reality.

Official sources said that the proposal for overall development of River Tawi front in Jammu city on the pattern of Sabarmati River front in Gujarat was approved in the 74th meeting of the Board of Directors of Jammu Development Authority held in June 2015.

The Memorandum of Understanding for management consultancy for technical assistance was signed between Jammu Development Authority and Sabarmati River Front Development Corporation Limited (SRFDCL) on April 14, 2016.

The feasibility report for the protection and conservation of River Tawi for a stretch of 3.5 kilometres between 4th Bridge and Gujjar Nagar Bridge amounting to Rs 396.52 crore as received from the consultants M/s SRFDCL was submitted to the Secretary, Union Ministry of Water Resources and as advised by the Ministry the Detailed Project Report was bifurcated by the consultants into two components.

The first component pertains to bank protection of River Tawi in Jammu city with broad salient features of construction of diaphragm walls, lower promenade, retaining wall, embankment construction and protection for all the four bridges at an estimated cost of Rs 375.73 crore for which the model study was conducted by the National Institute of Hydrology, Roorkee.

The second component pertains to catch water drain for River Tawi with broad salient features of construction of outlet structures for interceptors, construction of manholes, terminal sewer pumping station and rising mains at an estimated cost of Rs 31.96 crore.

Thereafter, in view of the development of lake through artificial ponding by virtue of construction of barrages a decision was taken in the 79th Board of Directors meeting of Jammu Development Authority held on November 17, 2017 to kick start the project and develop River Tawi front in the stretch of 1.5 kilometres downstream of Bikram Chowk Bridge up to 4th Tawi Bridge at Bhagwati Nagar in the first instance as pilot project at a cost of Rs 141 crore, sources informed.

Accordingly, tenders were floated for pilot project but in view of exorbitant/grossly in-genuine rates quoted by the bidders it was unanimously decided to seek the opinion of consultants with regard to analysis of rates.

Thereafter, fresh tenders were issued but this exercise could not reach logical conclusion in view of the rates quoted by the bidders, sources further informed.

Thereafter, fresh tenders were issued twice and in response to fourth call, three bids were received on December 20, 2018 and M/s Mehul Geo Projects with the quoted price of Rs 81.40 crore against the tendered cost of Rs 64.09 crore, which is 27% above, was the lowest bidder.

“Since then the matter is pending before the State Level Contract Committee”, sources disclosed, adding “because of dilly-dallying approach on the part of the Contract Committee no further progress could be made till date and much-hyped project remains confined to the official files”.

They further informed that the Detailed Project Report with the subject “feasibility report for protection and conservation of River Tawi in Jammu city” was submitted for appraisal in the month of April 2018. However, the Jammu Development Authority was directed to clarify some discrepancies including the one pertaining to No-Objection Certificate from the Forest Department.

“Till date the NOC from the Forest Department is awaited and for want of the same further steps could not be taken”, sources said, adding “quoting of higher rates by the bidders in response to all the four tenders was clear indication that the tendered cost of the Jammu Development Authority was not acceptable at all and this aspect should have received due attention of those at the helm of affairs in the Authority as well as in Housing and Urban Development Department”.

“Issuing one after another tender without seriously pondering over the cost aspect was merely aimed at buying the time”, sources said, adding “had serious attention been paid towards resolving the issue much headway could have been made on the important project till date”.