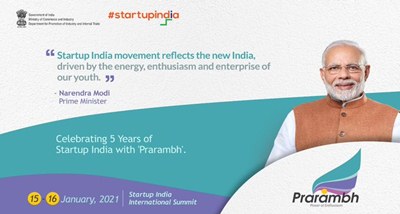 Prime Minister Narendra Modi will interact with startups and address ‘Prarambh: Startup India International Summit’ through video conferencing this evening. The two-day Summit is being organized by the Department for Promotion of Industry and Internal Trade, Ministry of Commerce and Industry. It is being organised as a follow up of the announcement made by the Prime Minister at the fourth Bay of Bengal Initiative for Multi-Sectoral Technical and Economic Cooperation (BIMSTEC) Summit held in Kathmandu in August 2018 wherein India committed to host the BIMSTEC Startup Conclave.

The virtual summit will bring together speakers from around the world and India, facilitate discussions on technologies, innovation, robust policies, and initiatives, enable government and international organisations to share their views and set on fire the minds of young Indian entrepreneurs, driving them to solve the problems and challenges that matter, not just for India but also for the entire world.

The Summit marks the fifth anniversary of the Startup India initiative, launched by the Prime Minister on 16th January, 2016. With participation from over 25 countries and more than 200 global speakers, the summit will be the largest startup confluence organised by the Government of India since the launch of the Startup India initiative. In addition to deliberating on good practices from best of the ecosystems across the world, the sessions of the Summit are designed to showcase the spread and depth of entrepreneurship based on innovation in India. The objective is to focus attention of global capital for startups in India, mobilize domestic capital, provide opportunities for accessing international markets to our startups and evolve enabling policy provisions.