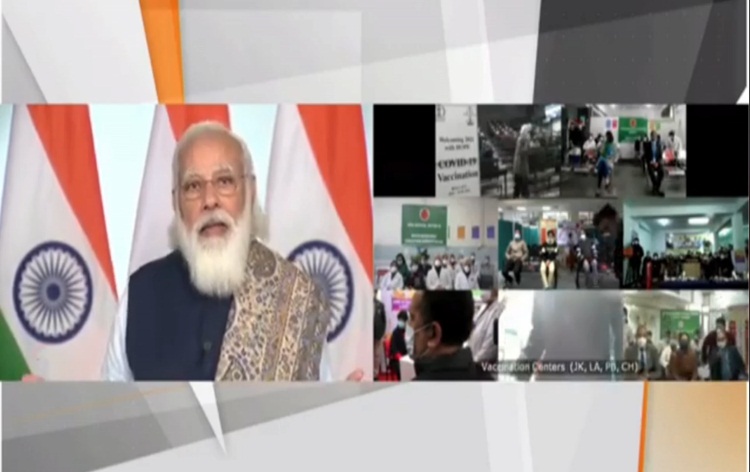 Prime Minister Narendra Modi today said India’s COVID 19 vaccination campaign is based on very humane principles and those exposed to maximum risk get priority. Launching world’s largest COVID-19 vaccination program through video conferencing, Mr Modi stressed that this type of large-scale vaccination campaign has never before been run in history. He pointed out that India is vaccinating three crore people in its first phase of vaccination. Mr Modi added that in the second phase, 30 crore people will be vaccinated. He said there are only three countries in the world with population over 300 million – India, China and the US.

The Prime Minister praised those scientists who had been involved in making the vaccine against Corona for the past several months. He exuded pride how two Made in India vaccines were readied in such a short period. Mr Modi said Indian vaccines are much cheaper than foreign vaccines but are equally good. He said there are some vaccines abroad whose single dose cost up to 5,000 rupees and have to be kept in freeze at minus 70 degree temperature. He said India’s vaccines enjoy global credibility because of their track record. The Prime Minister said scientists gave nod to the two made-in-India vaccines after being sure of their effects, and asked people to not heed rumours and propaganda.
Mr Modi highlighted the need to have two doses of corona vaccine. Between the first and second doses, a gap of about one month will be kept. The body will develop the immunity against the corona only 2 weeks after the second dose. The Prime Minister gave the mantra of “Dawai Bhi, Kadaai Bhi” and requested people to not make the mistake of taking off the mask and not maintaining social distancing after getting the first dose.

He said India’s fight against COVID 19 has been one of self-confidence and self-reliance. Mr Modi got emotional while talking about the hardships faced by healthcare and frontline workers during the pandemic. He said the whole world is today accepting the manner in which India has dealt with the pandemic. He said India also set the example infront of the world how Center and state governments, local bodies, government and social institutions can work better by uniting.

Mr Modi said India was among the first countries in the world to start screening passengers at its airports. January 17, 2020 was the date when India released its first advisory. He said the Janata curfew was a test of the restraint and discipline of the society against COVID 19, in which every countryman succeeded. He said the Janata curfew prepared the country psychologically for lockdown.

Speaking to the media on the occassion, Dr Harsh Vardhan said India’s fight against COVID 19 will be succesful with people’s participation.