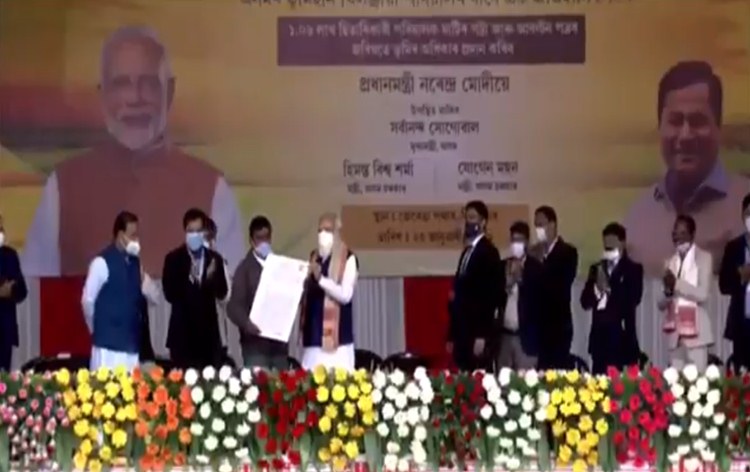 Prime Minister Narendra Modi handed over 1.06 lakh Land Pattas/Allotment Certificates to beneficiaries in Jerenga Pathar in Sivasagar in Assam. Speaking on the occasion the PM said he has visited Assam many times in recent years and said the people of Assam have blessed us.

In His speech Mr. Modi fondly recalled the greatest freedom fighter of the nation Netaji Subhash Chandra Bose. He said the entire country is celebrating the 125th birth anniversary of Netaji today  as ‘Prakram Diwas’. The country has made the decision to honour and remember Netaji’s indomitable spirit and selfless service to the nation. His life gives us inspiration even today, the PM said.

Speaking on the occasion CM of Assam, Sarbananda Sonowal said Prime Minister Natrendra Modi is the biggest well-wisher of Assam and its people. The development of Assam and the northeast region is due to the support given by the Prime Minister Modi, he said.

State Minister Himanta Biswa Sarma said Assam and northeast got due attention from the Central Govt and made unprecedented progress during the last 6 years. We thank the PM for giving the region a new direction in terms of growth & inclusive development:

Earlier the Prime Minister reached the state this morning and was given a warm and traditional welcome.

Taking into Account an urgent need to protect the Land Rights of indigenous People of the State, Government of Assam came out with a comprehensive New Land Policy with a renewed emphasis on protecting the Land rights of the indigenous People.