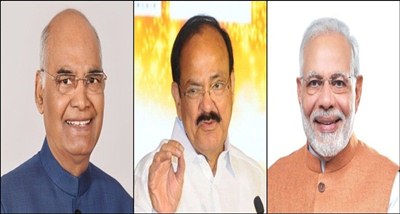 President Ram Nath Kovind has congratulated Joseph R. Biden on his election as US President and Kamala Harris, as Vice President. In a tweet, Mr Kovind wished Mr Biden a successful tenure and said he is looking forward to working with him to further strengthen India-US relations.

Vice President M Venkaiah Naidu has greeted President-elect, Joe Biden and the Vice-President-elect, Kamala Harris on their remarkable victory in elections. In a tweet, Mr Naidu said, he is confident that Indo-American relations will become much stronger in the coming years as both the nations with shared democratic values strive to make the world more peaceful and prosperous.

Prime Minister Narendra Modi has congratulated US President-elect Joe Biden on his victory in the elections. In a tweet, Mr Modi said, as the US Vice President. Mr Biden’s contribution to strengthening Indo-US relations was critical and invaluable. The Prime Minister said he is looking forward to working closely together once again to take India-US relations to greater heights.

Congratulating US Vice President-elect Kamala Harris, Mr Modi said, her success is pathbreaking and a matter of immense pride not just for her chittis, but also for all Indian-Americans. The Prime Minister expressed confidence that the vibrant India-US ties will get even stronger with her support and leadership.