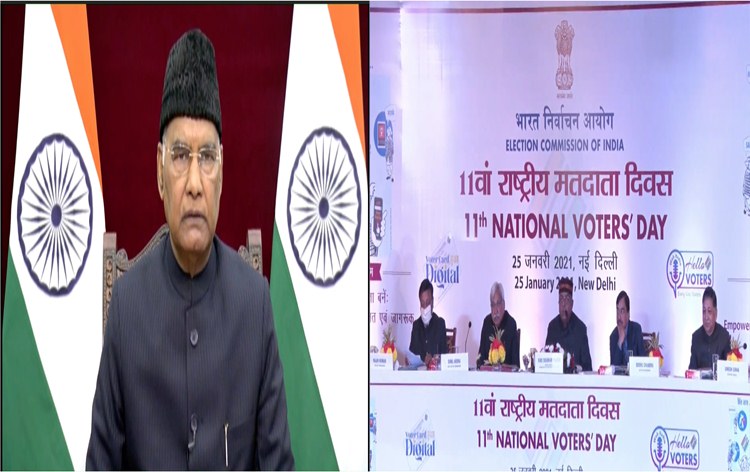 President Ram Nath Kovind has asked the countrymen to always respect the valuable right to vote saying that it is not a simple right.  He said people across the world have struggled a lot to get the right to vote.

Addressing a function through video conferencing in New Delhi on the occasion of National Voters’ Day today, Mr. Kovind said often, people do not realize the value of achievements which they get easily.

The President said people have been given right to vote without any discrimination on the basis of merit, religion, gender, race, caste and rich or poor in India. He added that for this, we all are indebted to the Constitution makers of the country. He also said the completion of successful and safe elections in Bihar, Jammu and Kashmir and Ladakh last year during COVID-19 epidemic is an extraordinary achievement of the Indian democracy. Mr. Kovid said, in the last 75 years,  India has emerged as a world-wide ideal of democracy and in this achievement, there is an invaluable contribution of the Election Commission as well as the citizens of the country.

Speaking on the occasion, Law Minister Ravi Shankar Prasad lauded the digital initiatives like e-EPIC of Election Commission. Mr. Prasad said the technology is a great enabler and the Commission has used it in a good way to empower the voters.

Talking about the Electronic Voting Machine, the Minister said there may be a difference of opinion about EVM but it is the fact that the instrument has given the power to almost all the political parties in varying degrees.  The booth capturing is the matter of  past now.  He added that any instrument designed to empower people should be welcomed.

Highlighting the initiatives of the poll body, Chief Election Commissioner, Sunil Arora said the e-EPIC programme is the new beginning.  On the occasion, the President also conferred the National Awards on State and District level officers for their outstanding performance in the conduct of elections in different spheres. Dr. Ranbir Singh, Chief Electoral Officer, Delhi was awarded for conducting accessible elections under the Best State Category whereas H. R. Srinivasa, Chief Electoral Officer of Bihar was also awarded under the same category for election management. During a function in New Delhi on the occasion of National Voters’ Day today, he also launched Election Commission’s Web Radio: ‘Hello Voters’ to create awareness among the voters.  The Law Minister launched the e-EPIC programme and distributed e-EPICs and Elector Photo Identity Cards to five new voters. e-EPIC, a digital version of the Elector Photo Identity Card can be accessed through the Voter Helpline App and websites.

The theme for this year’s NVD is Making Our Voters Empowered, Vigilant, Safe and Informed. It also focuses on the commission’s commitment towards conducting elections safely during the COVID-19 pandemic.

The Indian Constitution was promulgated on the 26th of January 1950.  But Article 324 of the Constitution, which created the Election Commission of India as a constitutional body, was among the very few provisions that was given effect a full two months earlier on the 26th of November 1949.  The ECI was set up on 25 January 1950 a day before India became  republic.