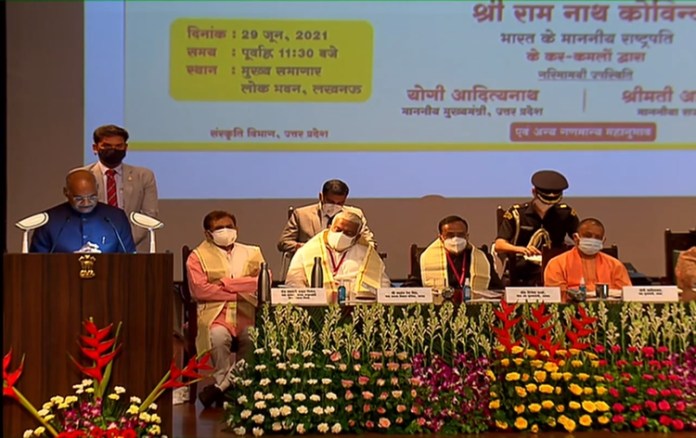 The President of India Ramnath Kovind today said that our real success lies in developing the nation and society on the principles and ideas of Baba Saheb Bhimrao Ambedkar. President was speaking at a function of laying the foundation stone of Dr Bhimrao Ambedkar cultural centre in Lucknow today. On this occasion, President said that Baba Saheb used to emphasis on equality and reiterated on Bhawantu sab mangalam means goodness for all, that is what the present governments are doing.

He said that Baba Saheb worked his whole life for an equal society and he was the architect of not only our constitution but contributed in many fields including banking, irrigation, labour management and education.

Talking about Lucknow city where this Ambedlkar smarak and cultural centre will be set up, President Ramnath Kovind said that Baba Saheb had a special connection with Lucknow and that is why it was his Snehbhumi. He said that central government has developed all places related with Baba Saheb.

He said that the proposed Ambedkar cultural centre along with other institutions established in Lucknow will help in spreading the teachings of Baba saheb.  President completed his 5 day visit to the state and returned to New Delhi on a special flight.

Speaking on the occasion, Chief Minister of the state Yogi Adityanath  said that the date of today’s function is also very important as on the same date 93 years back Dr Bhimrao Ambedkar started his weekly Magazine SAMTA. Governor of state Anandiben Patel said that the cultural centre will give inspiration to youths of the country. The proposed Ambedkar culture centre is being developed by the culture ministry of state.

The Cultural Centre will have a 750 seated auditorium, library, picture gallery, museum, multipurpose hall, dormitory, cafeteria, parking and other basic facilities. State government will spend around rupees 45.04 crore on this project. The Ambedkar Cultural Centre will have a grand statue of Dr Bhimrao Ambedkar along with landscaping and will be spread over 3 acre government land opposite historic Aishbagh Idgah.

Over 32 crore 90 lakh Vaccine Doses administered in country so far
DCGI might soon give ‘emergency use’ approval to Moderna’s Covid-19 vaccine for adults above 18 years: Sources
Comment