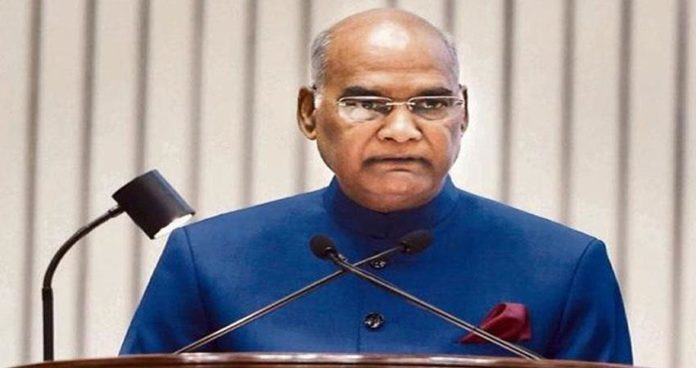 New Delhi: President Ram Nath Kovind completed three years in office on Saturday with the Rashtrapati Bhavan noting that he guided the country in the fight against the coronavirus pandemic and met nearly 7,000 people, including soldiers and scientists, during the year.

“The President of India, Shri Ram Nath Kovind, completes three years in office today,” it said in a tweet.

According to a Rashtrapati Bhavan communiqu , President Kovind, along with the First Lady and other members of the family, joined the fellow citizens and expressed their gratitude towards all those who are safeguarding the health of the nation in spite of grave risk to them and their families.

President Kovind also donated one-month salary to PM-CARES fund and has decided to forego 30 per cent of his salary for a year, it said in a series of slides mentioning various initiatives and work done during the third year of his presidency.

“The Rashtrapati Bhavan has rationalized its expenditure for optimal use of resources, the president’s office said.

President Kovind along with the Vice President held two video-conferences with Governors and Lieutenant Governors of all states and Union Territories to bolster the efforts at the central and state levels to contain and manage COVID-19, it said.

As many as 6,991 people met the president at the Rashtrapati Bhavan and during his visits to different states.

“On an average, President Kovind has met 20 persons per day, from soldiers to scientists, farmers to fire fighters, another slide said.

It said the president gave assent to 48 bills of the Union government and 22 bills of the state governments, promulgated 13 ordinances and appointed 11 governors, Chief Justice of India, Chief Information Commissioner and Central Vigilance Commissioner.

The president visited 19 states and four Union territories in the third year of his presidency, said the slide on Taking Rashtrapati Bhavan to the states .

Highlighting details of a more accessible Rashtrapati Bhavan, it said 1,22, 292 persons visited it since July 25, 2019.

The Mughal Gardens and public tours of Rashtrapati Bhavan is closed since March 7 and March 13 respectively as a precautionary measure against COVID-19.

The president presented colours to Corps of Army Air Defence at Odisha’s Gopalpur, to the Army Aviation Corps at Nashik, Maharashtra and to the Indian Naval Academy at Ezhimala, Kerala.

He also visited the School of Artillery, Deolali and interacted with brave gunners, said the slide titled Supreme Commander of the Armed Forces .

The president also honoured India’s best by interacting with achievers who have done commendable work in various fields.

Hailing from across the country, from Jammu and Kashmir to Kerala, these achievers were invited to meet the president and visit Rashtrapati Bhavan, it said.