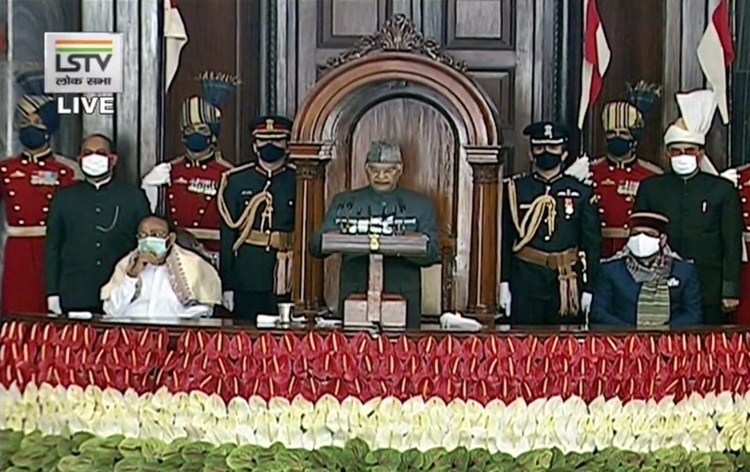 President Ram Nath Kovind has termed the insult of the national flag and the Republic Day during farmers’ protest on 26th of this month as unfortunate.

Addressing the joint sitting of both the Houses of Parliament on the first day of Budget session today, he said the Constitution which provides Freedom of Expression to people, is the one that also teaches that law and rules have to be followed by everyone seriously.

He said the three farm laws enacted by the Parliament in the previous session aim at further helping the farmers in the country  as they provide more rights and power to the farmers. Mr. Kovind added that over ten crore small farmers have started getting benefits from these reforms in the agriculture sector.

The President also said, in light of these benefits many political parties extended their full support to the reforms. The President however said the implementation of farm laws have been put on hold by the Supreme Court and the government will respect whatever is the decision of the Apex Court.

He asserted that the Central government has taken several measures to improve the condition of farmers in the country  like  implementation of  the recommendations of the MS Swaminathan commission  report on Agriculture.

It has increased the MSP of crops by 1.5 times. He also said the Government is committed to help the small farmers in the country by assuring them profitable returns.

Talking about the fight against COVI-19, Mr. Kovind said that due to timely decisions of the government, lives of millions of people have been saved and number of corona patients are gradually decreasing in the country.

He said, the country has started recovering from the damage done to the economy by the COVID pandemic amid centre’s incessant efforts to save the lives of the country’s people.

He added that even in these difficult times, India has emerged as an attractive place for the investors of the world.

Highlighting the several steps taken by the Government for the welfare of youth, the President said the Centre’s decision to end interviews in the selection process of Group C and D posts has greatly benefited the youth in the country.

He said the Centre has also set up the National Recruitment Agency to relieve the youth from the hassle of taking numerous exams for appointment to government services.

The President said it is a delightful coincidence that the nation started construction of the new Parliament while moving towards the 75th year of Independence.

He said the building will provide more facilities to MPs in carrying out their duties. President Kovind said the government is fully committed to protect the interests of the country.

Referring to the Galwan Valley incident, he said, additional forces have been deployed to protect India’s sovereignty over the LAC.