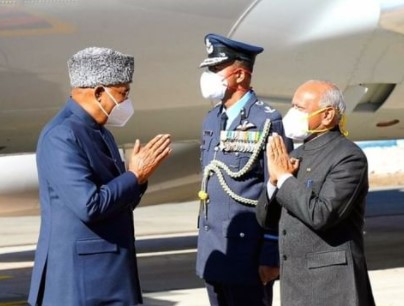 LEH: The President of India Ram Nath Kovind reached Ladakh on a two-day visit on Thursday, where he performed Sindhu Darshan Puja at Sindhu Ghat.

The president was Thursday received by the Lieutenant Governor of Ladakh RK Mathur at the Leh air field and was accorded the guard of honor.

Official sources said that President Ram Nath Kovind is on two days visit the Union Territories of Ladakh and Jammu and Kashmir and is scheduled to celebrate the Dussehra with the Indian Army Jawans at Drass in the Ladakh region on Friday.

They said that the president on Thursday performed the Sindhu Darshan at Sindhu Gath at Leh in Shey village.

In the evening they said that the president will travel to Jammu and Kashmir and interact with the troops stationed at Udhampur, the northern command headquarters of the Indian army.

Officials said that on the final day of two days visit to the twin UT’s, the president will travel back to Drass in the Ladakh region know as the world’s coldest place, and pay tributes to the 1999 Kargil war heroes at the famous Kargil war memorial. 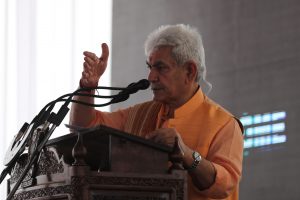 We will hunt down terrorists and their sympathisers: LG on civilian killings 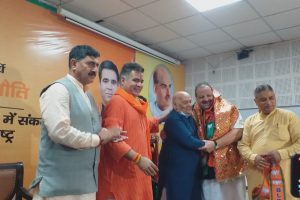 7 out of 808 families who had temporarily migrated are back home again: Sanjay Tikoo
JCO among two soldiers killed in fresh gun battle at Poonch, toll reaches 7
Comment