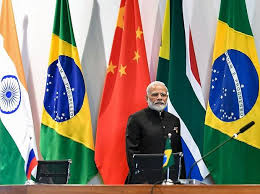 Prime Minister Narendra Modi on Thursday called upon the BRICS Business Council to prepare a roadmap to achieve the target of USD 500 billion trade between the member countries of the bloc by 2020, the year when Russia hosts the next summit.
“Until the next summit (takes place in Russia in 2020), the BRICS Business Council should make a roadmap to achieve the target of USD 500 billion intra-BRICS trade,” he said at the dialogue with BRICS Business Council and New Development Bank. The Prime Minister said that the partnership agreement between New Development Bank (NDB) and BRICS Business Council will be helpful for both the institutions, adding that India also requires huge infrastructure financial assistance.
He requested BRICS countries and NDB to join the coalition for disaster-resilient infrastructure and called for the completion of the regional office of NDB in India, saying it will give a boost to projects in priority areas.
“Several agrotech startups have emerged in five countries. Their network will be useful for sharing experiences and taking advantage of our large markets,” the Prime Minister said.
“To address the challenges facing universal health coverage, the Council should consider organising a hackathon in India on the use of digital health applications,” he added.
Concluding his speech, Modi said that India’s dream of strengthening BRICS economic cooperation can be realised only with the full cooperation of the BRICS Business Council and the NDB.
The Prime Minister, who is in Brazil on a two-day visit for attending the 11th BRICS summit, earlier today addressed the plenary session of the meet, where he highlighted issues including trade, investment, terrorism, water management and multilateralism.BRICS brings together five major emerging economies comprising 42 per cent of the world’s population, having 23 per cent of the global GDP and around 17 per cent of the share and world trade.