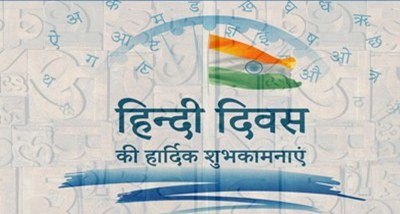 World Hindi Day is being observed today. The day is commemorated every year with the objective to promote use of Hindi language abroad. On this day in 2006, the First World Hindi Conference was held in Nagpur with the aim to promote the language worldwide and since then, every year 10th January is being observed as the World Hindi Day. The Ministry of External Affairs and Indian Missions abroad also observe the day annually.

Information and Broadcasting Minister Prakash Javadekar extended his best wishes to citizens on the occasion of World Hindi Day. Education Minister Ramesh Pokhriyal Nishank also extended his greetings on the occasion. In a tweet, Mr Nishank said that the languages play an important role in the social, political and cultural development of a country. He said, it is an important link in the unity and integrity of the entire nation. The Minister said, Hindi language is the key to establishing unity in diversity.

In a tweet on the occasion, UNESCO Director-General, Audrey Azoulay said, Hindi is one of the most spoken languages of the world. She said, on the World Hindi Day, we celebrate linguistic diversity to better understand each other.

On the occasion, Indian embassy in France shared a video of French citizen, Nikola who is greatly influenced by Indian culture and Hindi. He has been doing research on poetic contemplation of veteran Hindi poet Kunwar Narayan for the last two years.The Embassy also shared video of Gail Binakio who expressed her views on her relationship with Hindi language.

Hungarian lecturer and writer Dr. Maria Nejeshi, who dedicated her life to the promotion of Hindi language, extended wishes on the occasion through poetry recitation.