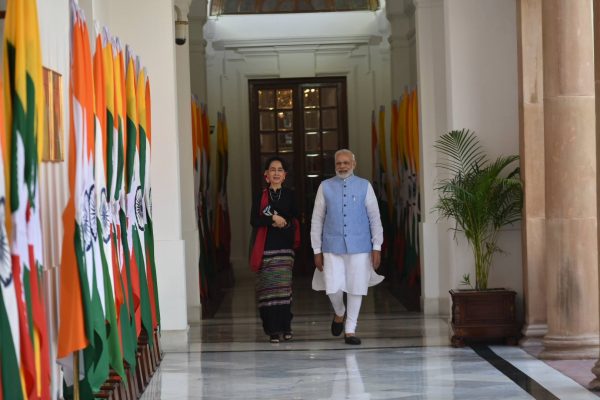 The February 1 military coup in Myanmar is now over 100 days old but the countrywide civil disobedience movement against it has not dissipated. The military or the Tatmadaw declared a one-year state of Emergency, established a new State Administrative Council (SAC) and placed the National League for Democracy (NLD) leadership – including State Counsellor Daw Aung San Suu Kyi, President Win Myint and others, under detention.

The military staged the coup on the day a new Parliament was to meet, in the aftermath of the November 2020 elections. Daw Aung Suu Kyi’s NLD won 396 of the 476 (contested) parliamentary seats in those elections. The army’s party, the Union Solidarity and Development Party (USDP), did poorly securing only 33 seats. The military refused to accept the results. Although a large number of ethnic minority voters were excluded, independent election observers found no evidence of systematic irregularities.

The February 2021 coup led by Senior General Min Aung Hlaing is the third in Myanmar’s history. The other two were in 1962 and in 1988 respectively. The military had also annulled parliamentary elections held in 1990 previously. It is pertinent to note that the military has a fair share of the levers of power. The 2008 Constitution secures a special place to the military, in that 25 per cent of the seats in parliament and local legislatures are reserved for them, as indeed key ministries like Home, Defence and Border Affairs. No amendments to the Constitution are possible without a 75 per cent majority.

The Constitution also disqualifies persons with foreign spouses from becoming president. This provision automatically excluded Daw Aung San Suu Kyi. The political parties accepted the special place accorded to the military by the 2008 Constitution and the military allowed the “discipline-flourishing democracy”, with multi-party elections held in 2010, 2015 and November 2020.

Thus, the compromise that the NLD as a party made with the military came to a dead end, a decade after the junta formally exited. The quasi-democratic experiment has been aborted, fueled by multiple factors, including political ambitions of Senior General Min Aung Hlaing. There were also fears on their part that after the resounding electoral victory, Aung San Suu Kyi could move to curb the military’s powers.

Developments in the geo-strategically important country impact India in myriad ways. Myanmar is the only ASEAN country with which India shares a land border, extending to 1643 kms, most of which is not fenced. Myanmar borders four North East Indian States – Arunachal Pradesh, Nagaland, Manipur, and Mizoram, and its help is critical to countering insurgency in India’s North East.

Peace in Chin and Rakhine states of Myanmar is essential for the completion of the Kaladan Multimodal Transit Transport Project and the Trilateral Highway project. The India-Myanmar-Thailand trilateral highway will provide connectivity from Moreh (Manipur) to Mae Sot (Tak province, Thailand) and the Kaladan project would link Mizoram to the Bay of Bengal. The political instability in the post-coup period is expected to divert the attention of the Myanmar Army from its periphery and its borders. Political instability and violence in Myanmar would also delay plans to further extend the trilateral highway to Vietnam.

The Arakan Army (AA) on the Myanmar side of the border continues to be a source of concern. It must be remembered that it was the Myanmar army that was assisting the Indian Army in dealing with the Arakan Army and the National-Socialist Council of Nagaland Isak-Muivah (NSCN (IM) in the period before the coup.

Second, the refugee influx from Myanmar to Manipur and Mizoram (due to common ethnic links and family ties) is a matter of concern for New Delhi. On March 18, the Chief Minister of Mizoram, Zoramthanga, had written to Prime Minister Narendra Modi seeking asylum and relief on humanitarian grounds for the Myanmar nationals belonging to the Chin community.1 Some of them were offered refuge by the local NGOs. The Mizoram CM’s request closely followed a directive from New Delhi on March 10, to the four North East states bordering Myanmar, to prevent illegal immigration and ensure expeditious deportation.

The position taken by Mizoram on the refugees and the insurgent issue respectively could be viewed as a challenge or an opportunity. Mizoram does not favour sending the refugees back to Myanmar.2 By the early 1990s (when the military junta still held sway), India had realised that if it wanted to succeed in its counter-insurgency effort on the Indo-Myanmar border, it could not do so without the support of the regime at the helm in Myanmar.

Does that lesson still hold for the current situation in Myanmar? Ought the central government heed the loud voice of a small state? Can it ignore the voices on the periphery? In sum, closer coordination between the central government and states (especially those on the borders) is essential for the successful attainment of critical national objectives.

Critics maintain that these voices are important because they are rooted to the ground and because they have the ability to negotiate with insurgents or constitute part of the ceasefire monitoring groups.3 But could they perhaps be a liability if the regime in power across the border tags such an interaction as an unfriendly act?4

Third, the growing international isolation of Myanmar government led by the Army could once again push the country into dependence on China. When Chinese President Xi Jinping visited Myanmar in January 2020, 33 important agreements were signed, including the Kyaukphyuyu Special Economic Zone and Kyaukphyu deep-sea port.

Earlier in 2018, Myanmar and China had signed an MoU to establish the China Myanmar Economic Corridor (CMEC). The 1,700km corridor is meant to connect Kunming to Myanmar’s economic hubs, first to Mandalay and then east to Yangon and west to Kyaukphyu. A framework agreement on Kyaukphyu was also signed in November 2018. Another agreement when Xi visited Myanmar in 2018 related to the New Yangon City project.

Developments in Myanmar pose a serious policy challenge to India. Myanmar is an important element for the success of India’s ‘Neighbourhood First’, ‘Act East’, and ‘Indo-Pacific’ policies. It was from Naypyitaw that Prime Minister Modi launched India’s Act East policy in 2014. India’s initial response to the February 1 coup expressing “deep concern” was moderate. India, however, upped the ante as death toll kept on rising.

India still retains the credibility of most stakeholders in Myanmar and could help in the country’s transition to democracy. India has in the past been the first responder in times of natural calamities like cyclones or earthquakes. India does not support sanctions against Myanmar. Sanctions have not worked in the past and are not likely to work now.

New Delhi supports ASEAN centrality and the ASEAN’s Five Point Consensus formula, announced at the Jakarta Summit on April 24, 2021 – attended by Senior General Hlaing, must be allowed a chance to succeed.5

India and Myanmar have enjoyed cordial relations at the highest diplomatic, political and military levels in recent times. An outstanding example of this understanding was the joint visit of the Foreign Secretary, Harsh Vardhan Shringla and the Army Chief, General Manoj Mukund Naravane on October 4-5, 2020 to Myanmar. During the visit, the two sides agreed to strengthen partnership in connectivity projects, reviewed progress of Rakhine State Development Programme and accorded Myanmar priority for vaccine and other aid.

Foreign Secretary Shringla while addressing the Ananta Aspen Centre on March 15 pointed out that India was concerned that the democratic gains made by Myanmar over the previous decades should not be undermined. He reiterated India’s “support to the process of democratic transition” and assured that India’s developmental and humanitarian efforts in Myanmar aimed at the socio-economic development of the country will continue, as would its constructive role as a non-permanent member of the UN Security Council (UNSC).6

Earlier, India’s envoy to the UN in Geneva, Indra Mani Pandey told the UN Human Rights Council (UNHRC) on February 12, 2021, that the rule of law and democratic processes in Myanmar must be upheld and the detained political leaders released.7 India’s Permanent Representative to the UN, Ambassador T.S. Tirumurti, also spoke on similar lines when he stated that “India has been consistently encouraging stakeholders to find practical and pragmatic solutions.”8

New Delhi’s policy options in Myanmar would depend on the evolving situation on the ground. It remains to be seen if the military can continue in power, in the face of the civil disobedience movement. The nature of the relationship between the Tatmadaw and China will be crucial. If it leads to greater dependence of the military regime on Beijing, it will impact India’s security negatively. India on its part must continue to engage with the Tatmadaw.

Apart from the civil-military conflict in Myanmar, the country is a hotbed of ethnic conflict. Minority ethnic groups are engaged in a civil war with the majority Bamar community. If the country slips into an extended civil war, then India will have to be prepared to deal with the ensuing implications for its Northeastern states.

The implications on national security and in countering insurgency will have to be kept in mind, while addressing the concerns of bordering states. At the same time, greater policy coordination between the central government and the border states can help avoid possible alienation of the local communities.

As a non-permanent member of the UNSC during 2021-2022, India can play an important role with other partners like Vietnam in building international opinion, given that Vietnam is also a UNSC non-permanent member this year. If a supportive international environment is built up through the UN and ASEAN, the military in Myanmar could be encouraged to return to the democratic road map.

As Myanmar and the region copes with the Covid-19 pandemic, it would be only appropriate that neighbouring countries, including India, prevent the country from not only failing but enable it to emerge as a successful ASEAN Member State.

The author is Senior Research Associate at the Institute for Defence Studies and Analyses, New Delhi and views are personal. The article first published on IDSA website.

Israel-Hamas Clash: What it Means for West Asia?
Rising tide of Radicalisation in Maldives
Comment