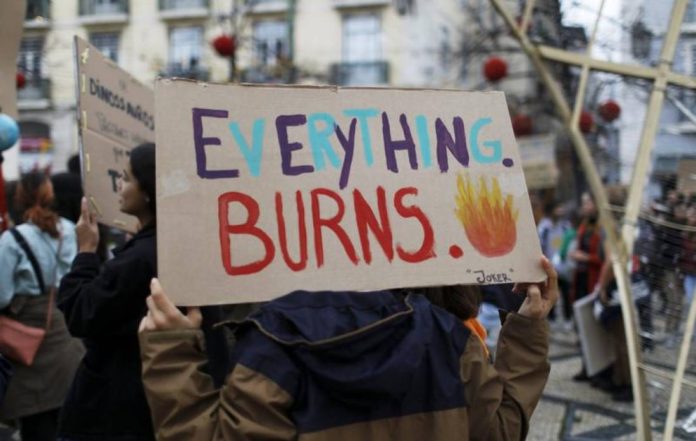 TBILISI: Six Portuguese children and young adults, who have faced deadly wildfires and heatwaves, on Thursday filed a lawsuit against 33 countries with the European Court of Human Rights, claiming government inaction on climate change jeopardises their future.

The applicants, aged between eight and 21, want the governments to ramp up efforts to curb planet-heating emissions, saying failure to do so threatened their lives and wellbeing.

“It’s terrifying to have a fire close to your home,” said Catarina Mota, 20, one of four applicants from Portugal’s Leiria region, which was among the worst hit by 2017 fires that killed about 120 people.

“I live with the feeling that every year my home becomes a more hostile place and as I get older, I will be exposed to violent heatwaves that will last for several weeks, and it scares me a lot,” she told an online press conference.

The two other petitioners live in Portugal’s capital, Lisbon, which has suffered extreme heat in recent years, with temperatures reaching a record of 44C (111.2°F) in August 2018.

“With so little time left to stop this, we must do everything we can to force governments to properly protect us,” Mota added in a statement.

Thousands of climate lawsuits have been filed against governments and companies worldwide in the past few years, but this case is the first to be brought before the European Court of Human Rights (ECHR), lawyers for the applicants said.

The action targets the 33 largest greenhouse gas emitters among the 47 member states of the Strasbourg-based ECHR, including all European Union countries, Britain, Switzerland, Norway, Russia, Turkey and Ukraine, they said.

According to research consortium Climate Action Tracker, those 33 countries are not doing enough to meet an internationally agreed goal of limiting global warming to well below 2C (3.6°F) above pre-industrial times.

Inadequate state efforts endanger the physical and mental health of the applicants, who risk being exposed to more deadly extreme weather in future, said Gerry Liston of the nonprofit Global Legal Action Network, which is supporting the case.

“Climate change is causing not just physical effects, but significant anxiety,” he told the Thomson Reuters Foundation by phone.

The six also argue that they are being discriminated against, because young people stand to suffer most from climate change which is expected to worsen over time, said Liston.

Their lawyers hope the court will find the states in breach of their obligation to protect the applicants’ rights, and order them to step up measures to cut emissions while setting an influential precedent for national courts, added Liston.

As governments now prepare to spend huge sums on reviving their economies after the coronavirus pandemic, Mota urged them to invest in green technologies rather than fossil fuels.

“Most of the world is following the advice of scientists to fight this virus, however governments are not doing what science says when it comes to fighting climate change,” she added.

In December, the Netherlands’ Supreme Court ruled in favour of a campaign group’s demand that the Dutch government move faster to cut carbon emissions.

But in January a U.S. court dismissed a case brought by 21 youths who accused the government of infringing their rights to life and liberty.

A year ago, Swedish activist Greta Thunberg and 15 other child petitioners filed a lawsuit with a United Nations’ committee, saying five countries that are substantial emitters of greenhouse gases were undermining their rights.

In May, Brazil, France and Germany – three respondents in the complaint – said charges against them lacked jurisdiction and were unsubstantiated. The case is still under consideration.