Note: Eminent historian James Barr describes in the book “Lords of the Desert” about how Americans took over the French role as Britain’s rival-allies in the Middle East after World War II. Drawing on newly declassified archives, the book argues that U.S. and Britain were mostly rivals, and only occasional partners in affairs relating to the Middle East. Though the two nations were allies, they found themselves at odds over just about every question, from who owned Saudi Arabia’s oil to who should control the Suez Canal. This rivalry and sometime partnership has shaped the modern Middle East.
‘Ah Enoch, dear Enoch! He once said something to me I never understood,’ Anthony Eden admitted in retirement. The former British prime minister was recalling a conversation that he and Enoch Powell had had during the late 1940s. The Conservative Party was then in opposition; Eden, at that stage widely regarded as the best foreign secretary Britain had ever had, had been picking his formidably intelligent colleague’s brains about housing policy before giving a speech.

‘I’ve told you all I know about housing, and you can make your speech accordingly,’ said Powell. ‘Can I talk to you about something that you know all about and I know nothing?’ he continued. ‘I want to tell you that in the Middle East our great enemies are the Americans.’

‘You know, I had no idea what he meant,’ Eden reflected all those years later. ‘I do now.’
With his chilly stare Powell came across as slightly unhinged, an impression that his incendiary later prophecy about immigration would only reinforce. But on this, at least, there is no question that Enoch was right. Powell had spent the pivotal years of the war in the Middle East. He had witnessed the fraught Casablanca conference between Churchill and Roosevelt in 1943 where, the president’s chief of staff admitted, ‘There was too much anti- British feeling on our side.’ And he was by no means the only man to see Britain and the United States as rivals in the region. His political opponent Richard Crossman wrote that the Americans represented ‘the greatest danger to British rule in the Middle East today’ after visiting Palestine in 1946. Nor was the feeling confined to the British. Two years later the American spy Kim Roosevelt, who had also served in Cairo in the war, remembered ‘times when British representatives on the spot were, in defiance of London’s instructions, doing all in their power to knife their American opposite numbers and . . . Americans on the scene whose every act was inspired by a desire to “do the British in”.’ A further, post- war tour of the area reinforced his view that ‘actually Americans and British in the Middle East get along rather badly’.

All this is now forgotten history. During the Cold War Britain and the United States tried not to draw attention to their differences, and to this day the British government retains over 100 metres-worth of files about its ally that it would rather not declassify. It is clearly best not to let too much light in upon the magic. This policy of secrecy and the Anglo-American coalitions in the Gulf in 1991 and in Iraq again after 2003 have helped obscure a fact that was once common knowledge: from 1942, until Britain’s exit from the Gulf in 1971, Britain and the United States were invariably competitors in the Middle East, and often outright rivals. As this book will show, the joint Anglo-American effort to oust the Iranian prime minister Mohammad Mosaddeq in 1953 – so often produced as evidence of Anglo-American collusion – was the exception, not the rule.

This is a fascinating chapter in a long- running story, because the Middle East has served as an arena for Great Power conflict since the beginning of recorded time. In the first half of the twentieth century, Britain and France were the great powers of the day. Midway through the First World War they carved up the Ottomans’ Arab territory between them and, once they had won the war, then subdivided it into mandates which they went on to rule for the best part of thirty years. The French left in 1946, chased out by Lebanese and Syrian nationalists who had had surreptitious British help. Any British sense of victory was short- lived, because a new contest, with the United States, then followed.


Britain’s original motive for wanting to control the Middle East was primarily strategic: by dominating a belt of territory stretching from Egypt to Iran she could control the route between Europe and India. Yet, by the time that Indian independence in 1947 rendered that rationale redundant, another justification had already taken its place – oil. British companies’ domination of Middle Eastern oil production generated vital revenues for the Crown, improved Britain’s perennially poor balance of payments, and would enable the country to defend itself in the event of a war with Soviet Russia. The belief that oil was, as one minister put it, a ‘wasting asset’ that would run out by about the end of the century – if it had not already been superseded by atomic energy (which many people at that time expected would be powering cars by now) – encouraged short- term thinking, and one hope in particular: the British might manage to resist mounting nationalist pressures for longer than the oil flowed out the ground.

Oil and the vast profits that it generated influence almost everything that happens after 1947 in this story: they were a constant source of tension between Washington and London. Compared to the British government – which owned a majority of the biggest oil company operating in the region and, through it, held a stake in another, the United States seemed far less organised. The goals of its government and oil industry were frequently at odds. Once the Americans had realised the sheer scale of likely regional oil reserves, the speculative concession won by a US company, Aramco, to hunt for oil in Saudi Arabia acquired a new, strategic significance.

Whereas short-termism led the British to defend their own interests aggressively, the Americans’ prime interest was initially commercial, which made them more realistic and flexible. Aramco came under pressure from the Saudis from the late 1940s onwards but, knowing it could count on the United States government’s support, agreed to split its profits fifty-fifty with the Saudi king. Not only did this suddenly increase the money that the Saudis could spend to advance their own regional ambitions – which caused huge political instability – but it also set a precedent that the American company’s British rivals refused to follow. That miscalculation triggered a series of events, starting with Iran’s nationalisation of Anglo-Iranian, that first stripped Britain of that crucial imperial asset, prestige, and left the region’s once great and now denuded power fighting increasingly desperately to cling on.
The Americans knowingly abetted this process, a fact that Eden – despite his later claim of ignorance – knew full well at the time. Six months after the crucial battle of El Alamein – at a time when the British still directly ruled Palestine and occupied half of Persia, and whispered in the ears of the kings of Egypt, Jordan and Iraq – the foreign secretary wrote a memorandum in which he acknowledged how difficult the Anglo-American relationship in the Middle East had become. In it, he summed up the threat to Britain’s position in the region as being ‘a major nationalistic revival . . . of two contending forces, Arabism and Zionism’ stoked by ‘Zionist propagandists in the United States’. As Eden’s use of the word ‘revival’ implied, the British had seen both before. What was new – and ominous, in the foreign secretary’s eyes – was how the Zionists were now successfully courting the support of the United States. And in due course the leading Arab nationalist of the era, Eden’s nemesis Gamal Abdel Nasser, would as well.

The British intended to enlist the Americans to deal with both these threats. They hoped to thwart Zionist ambitions by persuading the US government to recognise their privileged position in Palestine. If they could also convince Washington to support the post- war economic system for the region that they had dreamed up, they reasoned that they might prolong their dominance of the Middle East as a whole.

Today this strategy seems obviously flawed, but in 1945 the British did not have the advantage of hindsight. They expected their counterparts to lapse into their pre-war state of isolation, just as they had done after the First World War. When this did not happen, the British found themselves in competition with a formidable rival – the very ally they had assumed would be their closest friend. This is the story of their struggle. 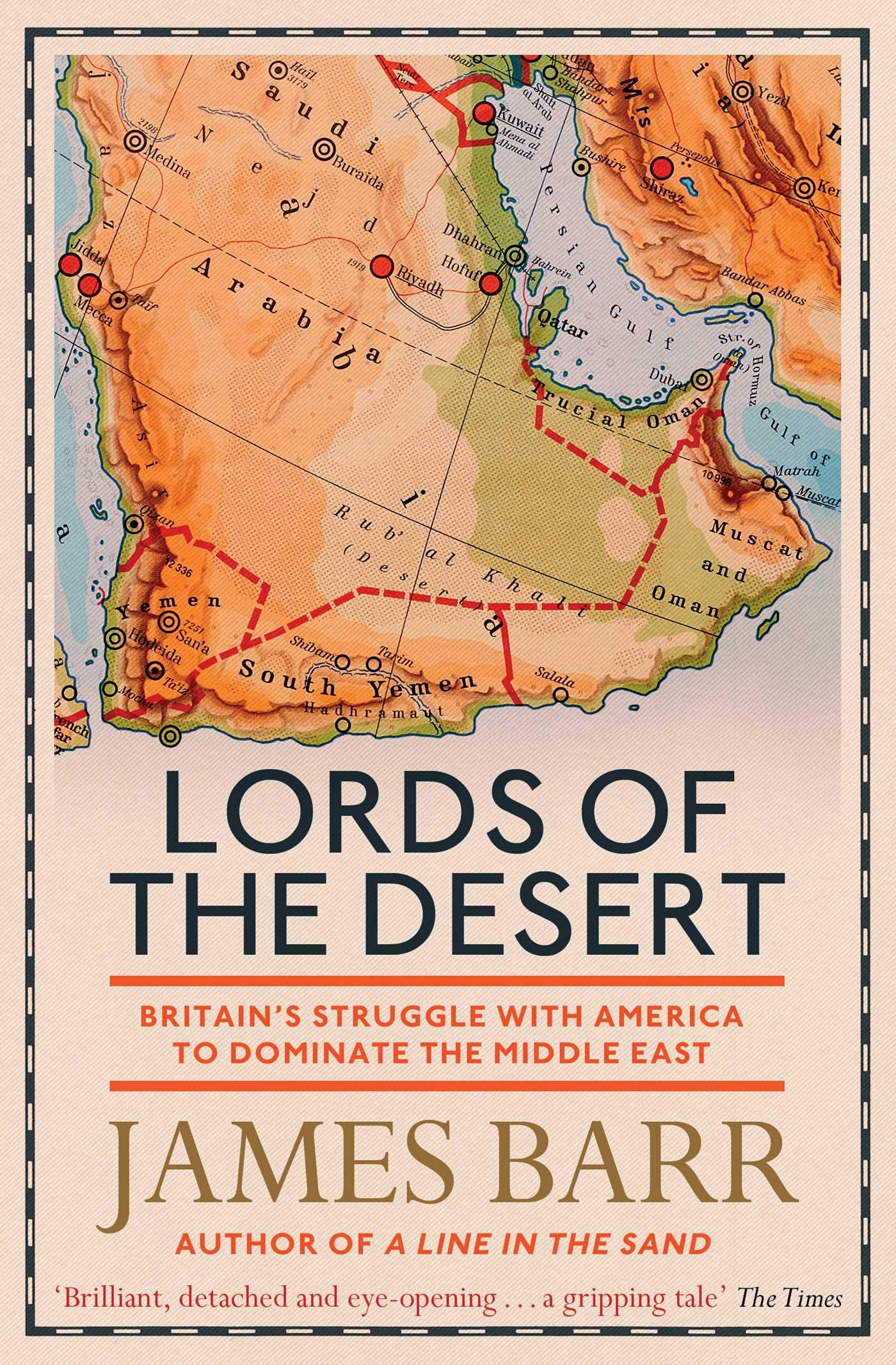 Excerpted with permission from Lords of the Desert: Britain’s Struggle with America to Dominate the Middle East, James Barr, Simon & Schuster. Read more about the book here and buy it here.

Shah Mosque in Isfahan, Iran: One of the world's most beautiful mosques, it is known for its splendid architecture and seven-colour mosaic tilework
Books authored by Mirza Waheed and Santanu Das win The Hindu Prize 2019