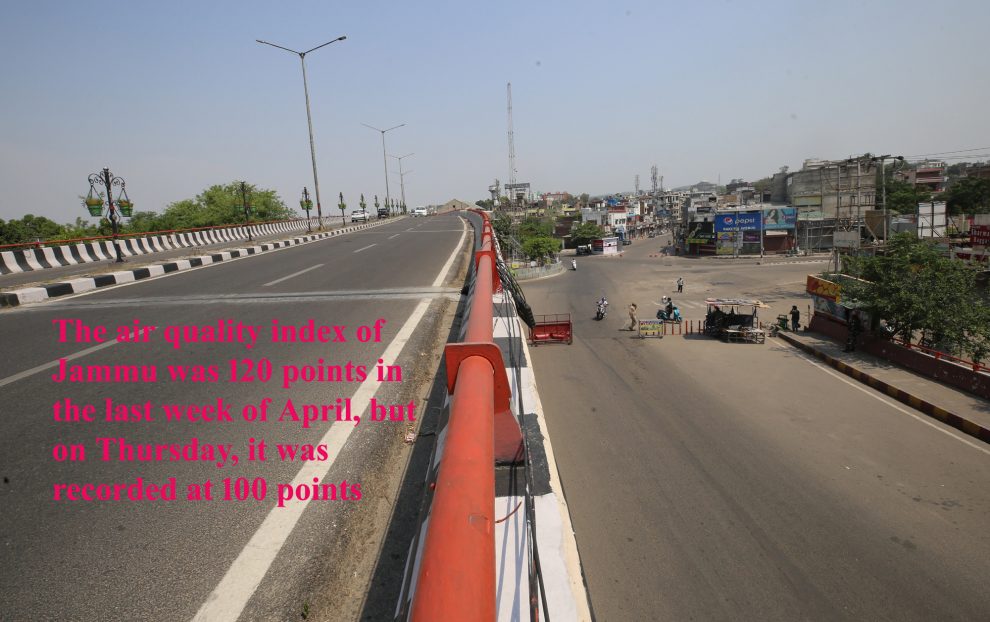 Jammu: In view of the ongoing Corona Curfew, the pollution level has improved in the winter capital of Jammu and Kashmir while the air quality index has dropped by 20 points in the past two weeks.

“The air pollution has seen a drastic improvement in Jammu city as vehicles remained off road during the 15-day Corona Curfew imposed to break the chain of surging COVID cases,” official sources said.

They said that the Wednesday night rains till Thursday morning, settled the dust particles in the air to a great extent, adding, “the air quality index of Jammu was 120 points in the last week of April, but on Thursday, it was recorded at 100 points.”

They said that generally, the air quality index of Jammu remains around 110 to 120 but it has improved significantly in the past few days.

State Pollution Control Board officials said, “the air quality index in the city remains above 100 points, it is not considered to be safe for children, elderly people and those having respiratory problems.”

They said that Jammu was in the sensitive category in the month of March-April but has improved now.

Although there are twelve standards set to check the pollution level of the city in those cities only where the process is online while in Jammu, statistics are being recorded manually, they said and added, “regular checks are being conducted on behalf of the board at Bari Brahmana, Pollution Board Office at Narwal and Maulana Azad Stadium.”

“Respiratory Suspended Particulate Matter are dust particles with a size of up to 10 microns, and if their number is high in the air, then they can go enter into the body through breathing and can cause stomach related diseases,” official sources said adding that particulate matter whose size is 2.5 microns or less are the most dangerous because they enter into the lungs which can cause serious asthma-like diseases.

However, sources said that Nitrogen Oxide is a gas produced by the burning of oxygen at the highest temperature in a heavy volume and it often happens during production in factories and this is the reason, Jammu air is not much polluted, adding, “Sulfur Oxide is also a form of gas produced due to heavy burning of coal often in thermal plants or large furnaces, which are almost negligible in Jammu.”

Announce welfare scheme for journos, declare them Frontline warriors: J&K scribes in one voice
Scarcity of medical equipments in market adds to woes of COVID patients, families in Jammu
Comment