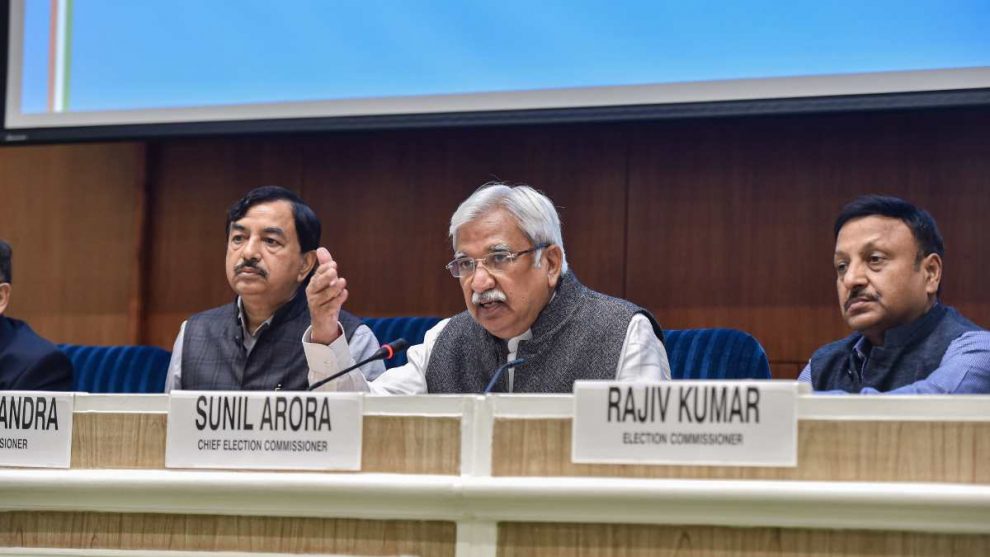 Assembly elections in West Bengal, Assam, Tamil Nadu, Kerala and Puducherry will be held between 27th March to 29th April. The counting of votes in all the four states and one Union Territory will take place on 2nd May.

Chief Election Commissioner Sunil Arora announced the poll schedule in New Delhi yesterday evening. The assembly elections in Tamil Nadu, Kerala and Puducherry will be held in a single phase on 6th April.

Assam will go to polls in three phases on 27th March and 1st and 6th April, various election-related activities are gradually gaining momentum following the announcement of election dates. Polling will be held in  3 phases beginning from the 27th of March.

Following the announcement of the election schedule, various district administrations started removing of banner hoardings that were displayed to highlight various welfare schemes.

In the Union Territory of Puducherry Polling for 30 assembly seats will be held on 6th April. The Election Commission of India (ECI) announced this yesterday. Of the 30 Assembly seats, five are reserved for the Scheduled Caste candidates.

In view of the Covid 19 pandemic, the polling time been increased by one hour. AIR Correspondent reports that the counting of votes will be held on 2nd May.

Following the announcement, while talking to the Media persons the Chief Election Officer of Puducherry Mr. Shurbir Singh said that since the number of voters per booth has been restricted to 1000 by the ECI, 607 new booths have been set up taking the total number of booths from 952 to 1559.

154 vulnerable hamlets, 233 vulnerable booths and 16 critical booths have been identified and around 3098 policemen will be deployed for security and 9140 government staffs will be involved in election duties.

All polling staffs will be vaccinated before election and face mask, sanitiser, gloves will be given. The ceiling of expenditure has been fixed 22 lakh rupees , he added.

According to special summary revision of electoral rolls in all the 30 constituencies of the UT, there are about 10,02, 414 voters. It is to be noted that the continuous updation of Electoral Rolls is still in progress.

The Election Commission also announced by-poll for the Kanyakumari Lok Sabha constituency in Tamil Nadu and Malappuram Lok Sabha seat in Kerala which be held on 6th April.