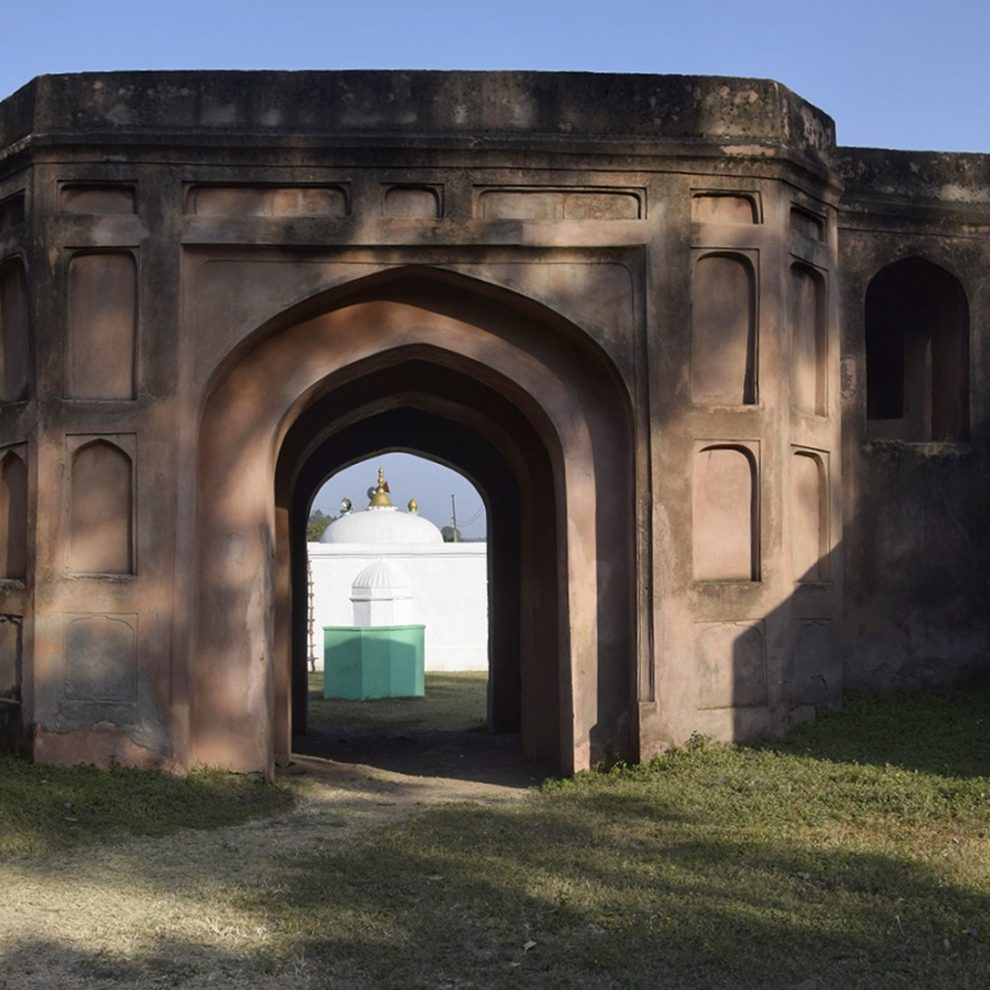 Rajouri has been one of the long-lasting hill states of India from ancient period onwards. Its mention is found in Kalhan’s Rajatarangini, the first historical work of the Indian sub-continent. Kalhan mentions it Rajapuri. Situated in the valley of Munawar Tawi and Pir Panjal range it has been shown first inhabited by two ancient tribes –Darva and Abhisara. Rajouri visited by the famous Chinese traveller Hiuen Tsang in the 7th century A.D. He mentions the nomenclature Ho-lo-she-pu-lo for Rajauri. Alberuni, the author of Kitab-al-Hind, mentions it Rajawari. Though there is a paucity of indigenous sources of the history of ancient and medieval Rajouri, Kalhan’s mentions show that Rajauri emerged as a state during the tenth century A.D. and the Pal was the first ruling dynasty of Rajauri. From the tenth century to 19th-century Rajauri largely remained either an independent state or autonomous state. It is known that the ruling family of Rajauri accepted Islam in the 14th century. But its kings always used the Raja title.

However, Rajouri as a state acquired prominence and grandeur during the 16th century. It is well-established fact that the Mughal emperor Jalaluddin Muhammad Akbar (1556-1605) was the first ruler of India who conceived the concept of India as a country spreading from Kabul to Indian ocean. Therefore, he declared that there could be only one sovereign power in the country. He asked all the local rulers of India to accept his sovereignty. But he also ensured that all local rulers accepting the Mughal sovereignty would enjoy political autonomy on the basis of the payment of annual tribute (peshkash) to the Mughals. In 1586 he decided to conquer Kashmir. But Yusuf Shah Chak, the ruler of Kashmir, frustrated the first attempt of the Mughals. Since Rajauri was situated on the way to Kashmir and it was the most suitable route, the Mughals decided to take the assistance of the Raja of Rajauri. At that time Sarmast Khan was the king of Rajauri. Before launching another military expedition to Kashmir the Mughal commander Muhammad Qasim wrote a letter to the King of Rajauri for his help for the conquest of Kashmir. The Mughal commander assured him that he would be rewarded by the Mughal emperor for his assistance. When Mughal commander reached Rajauri, Sarmast Khan came and met him. The latter also agreed to guide the Mughal army to Kashmir through a safer route favourable to the Mughals. The Raja also provided transport and other facilities to Mughals. When the Mughal army moved from Rajauri its king accompanied the army. But when the Mughal reached Darhal it found the route blocked by the Kashmir army. Sarmast Khan guided the Mughals army through another route. The guidance of Sarmast Khan brought the rich dividends to the Mughals in terms of the victory of Kashmir.

The Mughal emperor Akbar was very much impressed from the services of the king of Rajauri during Kashmir expedition. He acknowledged the assistance of Sarmast Khan and decided to form a coalition with him. Thus from 1586 onwards, the Mughal and Rajauri coalition started to work for the protection of the interests of each other in the hills. Akbar honoured the Raja with huge favour. He assigned him a Jagir Kashmir producing the revenue of Rupees fifty thousand. It is important to mention that the Rajas of Rajauri enjoyed the jagir till the survival of the state. (J. Hutchison and J. Ph. Vogel, History of the Punjab Hill States, p. 685).

It is known that whenever Akbar went to Kashmir he halted at Rajauri. The Raja of Rajauri came and met the Mughal emperor. The latter received him with a great respect. Akbar also honoured the members of the royal family of Rajauri with the title of the Mirza. The Mirza title continued to be used by the royal family members from generation after generation as a symbol of the royal identity. More importantly, Akbar started the construction of a road from Rajauri to Kashmir under the supervision of the Raja. The expenditure of the road was born out by the Mughal treasury. This road became famous as the Mughal road. Akbar also built a fort at Naushera which still exists. This fort was built for the security of the road. Since stone was available on large scale in the state, the Mughal emperor used stone as the building materials. The Mughal emperor Nuruddin Jahangir (1605-27) calls it a stone fort. Thus the Mughal emperor Akbar not only received assistance from the Raja of Rajouri for making his Kashmir policy successful, but he also elevated the position of the Raja in the hills through financing reward and building activities. It is important to mention that Rajauri route also utilised by the merchants for commercial purpose to Kashmir. The making of road and fort became instrumental in the economic prosperity of the Rajauri.

The Mughal emperor Jahangir visited Kashmir eight times along with his queen Nurjahan. Each time he halted at Rajauri. He showed a great interest in the social and economic life of the state. He wrote an autobiography and recorded several socio-economic identities of Kashmir. His autobiography entitled Tuzuk-i-Jahangiri mentions that during the reign of the Sultan Firoz Shah Tughluq (1351-87) of Delhi, Islam entered Rajouri. He also mentions the existence of some social evils such as burning of women after the death of their husbands among the Hindus and burying of women after the death of their husband among the Muslims.

and girl infanticide. More interestingly, Jahangir records the existence of the inter-religion marriages in Rajauri. Jahangir also gives an interesting description of the agricultural productions of Rajauri. According to him, the quality of the rice of Rajouri was better than the rice of Kashmir. But Jahangir was very much disappointed with the quality of the water of the river of Rajauri. According to him, its water was poisonous during the rainy season and its consumption caused certain diseases such goitre and jaundice.

The information regarding the political and socio-economic life of Rajouri provided by Jahangir are very useful for the construction of the history of Rajauri. It may be mentioned that there was no trend of historiography in the state during the ancient and medieval period. There is hardly any contemporary source of the history of either ancient or medieval Rajauri. It is well established that the Mughals had a very effective tradition of the historiography. Therefore, when Mughal-Rajauri coalition was established, the Mughal chronicles started to incorporate some of the historical events of Rajauri. The information of the Mughal sources pertaining to the history of Rajauri helps to know the concepts of others pertaining to its historical developments.

Jahangir helped the Raja of Rajauri in establishing the security on the routes of Rajauri. Following the instructions of the emperor, the Raja of Rajauri established a number of Chaukis and deployed guards to ensure the security of the route from Rajauri to Kashmir. Jahangir’s association with Rajauri has been immortalised with burying of its intestine at Chingus. It is known that in the last year of his life Jahangir was in Kashmir. His was ill at that time. In 1627 when he was coming back from Kashmir he halted at Rajauri and his illness caused his death. Therefore, his intestine was taken out to preserve his body and it was buried at Chingus of Rajauri. A Sarai was also built there.

Like his ancestors, the Mughal emperor Shihabuddin Muhammad Shahjahan also visited Kashmir and received the assistance from the Raja of Rajauri during his halt there. But Shahjahan surpassed all his predecessors in terms of his political ties with Rajauri. Shahjahan married his son Aurangzeb with the daughter of Raja Tajuddin (1600-46) of Rajauri. The name of the Rajauri princess, married to Aurangzeb, was Rajbai. When Aurangzeb (1658-1707) became the Mughal emperor she received the status of chief queen of the Mughal empire. Her son Muazzam or Bahadur Shah I (1707-12) became the Mughal emperor after the death of Aurangzeb in 1707. Bahadur Shah I is known a very liberal Mughal emperor and just opposite of his father. Thus the coalition of Mughal-Rajauri led to the creation of a Mughal head of state whose mother belonged to Rajauri. Moreover, the Mughal emperor Aurangzeb extended the huge favour to Rajauri in terms of its territorial expansion and building activities. It is known that Aurangzeb assigned Punch, Samlah, Manawar, Khari-Khariyali and Bhimbar in Jagir to the Raja (Inayatullah Khan) of Rajauri. Aurangzeb constructed forts at Manawar and Indrakot. He also laid out a garden near Tohi river, called Shalimar.

The political coalition between the Mughals and Rajauri worked very effectively up to first half of the 18th century. It became fruitful for both the Mughals and Rajauri. The Mughals got a very trusted ally in the hills which acted a partner of the Mughals for their success in Kashmir. Rajouri’s formation of a political alliance with the Mughals tremendously enhanced its political power in the hills. It is important to mention that after its ties with the Mughals Rajauri political influence was extended to Kashmir and its other neighbouring areas. It also led to the creation of some everlasting heritage of Rajauri. The Mughal Road, Naushera fort and Chingus Sarai are still the most famous heritage of Kashmir. They tell the past glories of Rajauri and treated as the sources of the identity of Rajauri. Thus the Mughal concept of the sharing of political power with the regional ruling dynasties and grant of political autonomy to them ensured both the political stability and socio-economic development. The information provided by the Mughal historical sources work as a source of inspiration for the people of Rajauri in terms of their historical achievements.

Impressive rural income in J&K. Why no alternative to BJP
Types of Mattresses