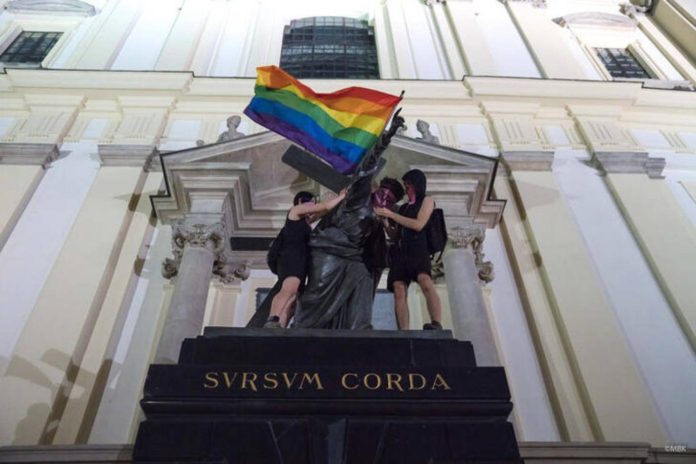 LONDON: A Polish LGBT+ protestor could be jailed for hanging rainbow flags on statues in the capital, Warsaw, her lawyer said on Thursday, as gay rights divide the eastern European country.

Three activists were arrested this week for draping flags over five statues, including one of Jesus carrying the cross and the Mermaid of Warsaw, a centuries-old symbol of the city.

Margo Szutowicz’s lawyer said she could face up to two years in jail for offending people’s religious feelings “by outraging in public an object of religious worship”, as well as a fine or community service for the second crime of profaning a monument.

“My client does not admit to those charges presented to her,” said Maria Radziejowska, adding that Szutowicz was only under investigation as a suspect and had not been charged.

The two other activists are being investigated for profaning a monument, said their lawyer Katarzyna Gajowniczek-Pruszynska.

The Warsaw state prosecutor’s office did not respond to requests to comment and a police spokesman declined to comment.

Duda, who was elected in 2015, won a second term last month after an acrimonious campaign laced with homophobic language and appeals to religious conservatives, raising fears of further discrimination among LGBT+ Poles.

About 20 pro-LGBT+ lawmakers wore rainbow masks and held up copies of the constitution when Duda was sworn in on Thursday.

The three activists were released on Wednesday and their lawyers are waiting to see whether they will be charged.

“It wasn’t aimed at the Catholics or their rights,” said Lania Madej, 22, one of the arrested members of Stop Bzdurom, or Stop Bullshit, a feminist LGBT+ campaign group.

“We wanted to show there are also queer people in Poland; they are not alone. There are a lot of us and if there are monuments, they are also our monuments.”

Poland is the worst country in the European Union for gay rights, according to a poll this year by the LGBT+ lobby group ILGA-Europe.

Three campaigners arrested in 2019 for posters depicting the Virgin Mary with a rainbow halo are still awaiting trial at home with no date set, their lawyer Radoslaw Baszuk said.

Ola Kaczorek, co-president of LGBT+ advocacy group Love Does Not Exclude Association, said she was raising funds for the legal defence of activists.

“It’s just the beginning for us unfortunately,” she said.