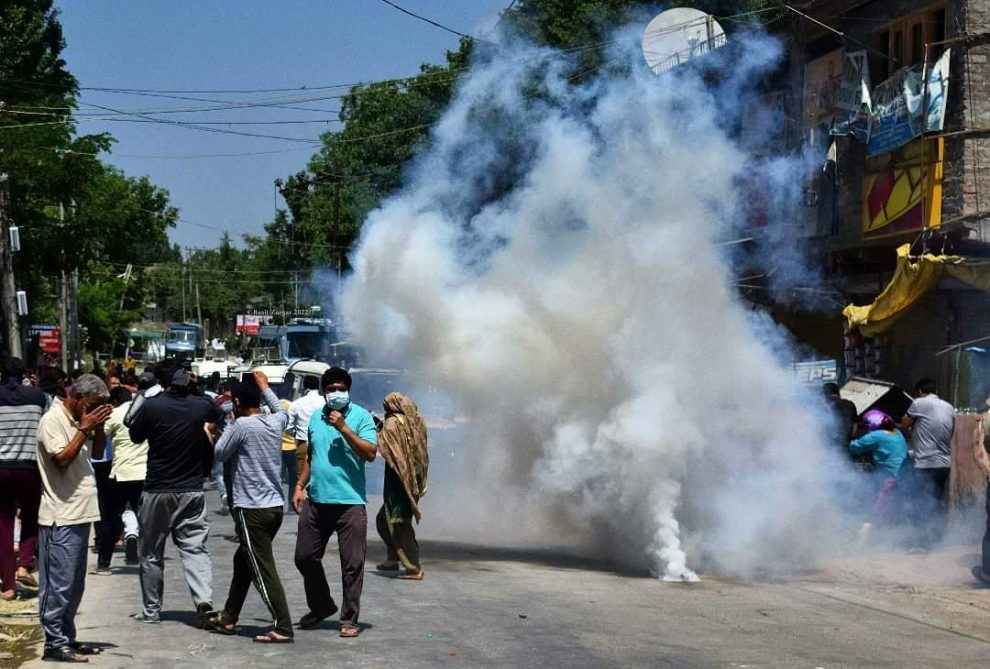 BUDGAM: Police on Friday said that it was constrained to “hurl” a few teargas smokes to disperse protesting Kashmiri Pandits for their “security”.

“Today at about 1100 hours, protesters who were protesting against yesterday’s killing of an employee (Rahul Bhat) at Chadoora had blocked main Sheikhpora Budgam road since yesterday afternoon suddenly started moving towards Airport road,” a police spokesman said in a statement.

“Although the magistrate repeatedly requested and tried to pacify the protesters not to proceed towards the very busy and overcrowded Airport road, however, protesters while ignoring such persuasions and repeated requests from the administration, kept on moving towards the said road while forcibly breaking all the physical barriers en-route and pushing the police & Security Forces who were peacefully trying to persuade/stop them from moving ahead.”

The protesters who were “adamant to block the Airport road, however, did not pay any heed and instead managed to travel a distance of about one kilometer from Sheikhpora, the spokesperson said.

“Given the topography of the area and huge rush at the Airport road there were inputs that (militants) may take advantage of the same and may attack the protesters in order to create communal clash/tension,” he said, adding, “Therefore, in view of this, while sensing the security of the protesters who had resorted to violence and neglected the pacification requests by the administration and to thwart evil designs of ANEs, police were constrained to finally hurl few teargas smokes to disperse them.

” However, the spokesperson said, the protesters again re-assembled at Sheikhpora road and sat in protest and blocked the main road. “Later on all of them went to their home.” (GNS)