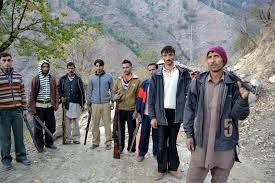 REASI; The Jammu and Kashmir Police has reactivated village defence committees (VDCs) to deal with the threat of militancy in the Union Territory’s Reasi district, officials said on Sunday.

Though they are not professionally trained they are highly committed towards self and community defence against militants, who are equipped with sophisticated weapons, they said.

VDCs have proved a stonewall defence against millitancy in remote hilly areas of the Jammu zone, the officials said.

Considering them an invaluable asset to the police department and a force multiplier for security of the region, district police chief Shailender Singh chalked out a detailed strategy for practice fire for VDC members in Reasi.

Considering it an important exercise for those who have not checked their weapons and fired since long, Senior Superintendent of Police Singh said a schedule of one week will be helpful for nearly 6,000 VDC members, including 20 women, of the district, who are deployed in their villages for safety and security.

Under this, VDC members from Reasi and Katra areas have been allotted the training centre at Talwara, and those from the Arnas police sub-division, will practice at Rud Khad, the officials said.

VDC members and Special Police Officer’s are part of this exercise, the officials said

Singh said that “VDC being a force multiplier is considered as the first response to thwart any nefarious designs of anti-national elements in remote areas”.

He stressed that as VDCs play a pivotal role in safety and security, it is necessary for them to exercise and practice firing their weapons.

This can be only done with such exercises from time to time, Singh said and conveyed that the Reasi police will conduct many other exercises with the involvement of VDC members of the district. (PTI)