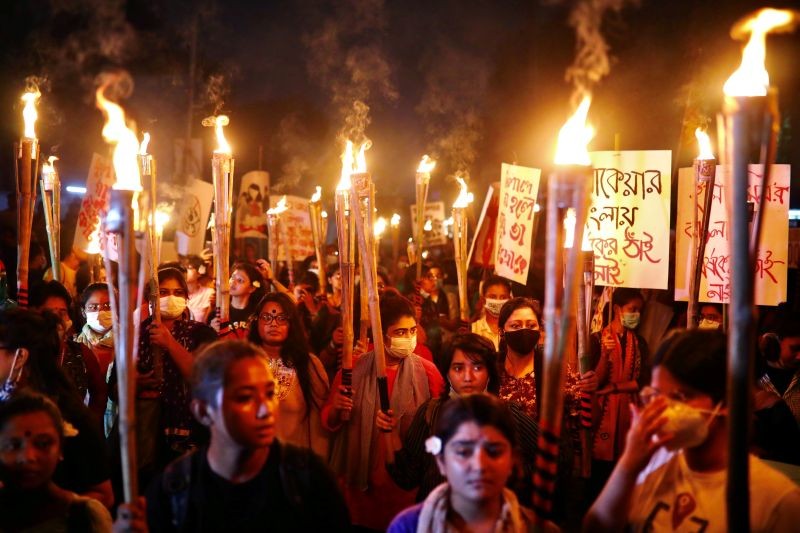 “We have different teams working with cyber crime in the police… but many (women) don’t want to approach these areas, that’s why we have created an all-woman team,” said Benazir Ahmed, inspector general of police.

“We believe that women will be more comfortable to speak to the all-woman team… the unit will not reveal the names of the women who complain. This will further encourage them,” he told a news conference on Monday.

Women account for most of the victims of the nearly 6,100 cases filed under various laws to prevent digital abuse in Bangladesh, police say.

Monday’s announcement comes as authorities respond to growing concern in the country about an increase in sex crimes including rape in recent years.

Last month, the government extended the use of the death penalty for rapists following protests over an online video that showed a group of men sexually assaulting a woman.

Nearly 1,350 women were raped in Bangladesh in the first 10 months of this year, according to rights group Ain o Salish Kendra, about 100 more than the number of rapes reported during the same period last year.

Women’s rights activist Maleka Banu said the surge in online sexual abuse reflected a steep increase in internet usage in the South Asian nation, where the number of people getting online has doubled over the last five years, official data shows.

“It’s easier to target women online rather than in the real world. All you need is a phone,” said Banu, general secretary of women’s rights group Bangladesh Mahila Parishad.

“Starting an all-female police unit is a good step. But this unit needs to be monitored properly, so that women can reach out to them, or else it won’t create any change,” she added.