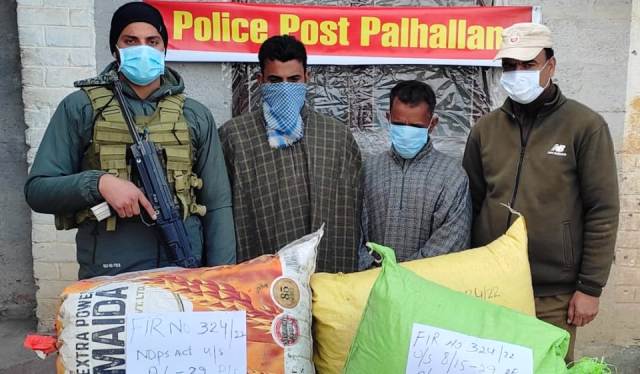 Baramulla: Police on Tuesday arrested three drug peddlers in Baramulla and Ganderbal districts of Kashmir and recovered contraband substances from their possession.

In Baramulla, a police party led by SHO PS Pattan along with Incharge PP Palhallan during routine naka checking at Dargam crossing Pattan intercepted two suspicious persons. During checking, 29Kgs of Poppy Straw like substance were recovered from their possession.

They have been arrested and shifted to police station where they remain in custody.

Similarly in Ganderbal, a police party led by incharge PP Shadipora under the supervision of DySP Hqrs Ganderbal during patrolling at Zazuna arrested a suspicious person.

During search, Codeine Phosphate bottles were recovered from his possession and he has been shifted to police station where he remains in custody.

Accordingly, cases under relevant sections of law have been registered in respective police stations and investigation has been initiated.

Habitual Timber Smugglers to be booked under PSA: DM Sachin Kumar
We are witnessing transformation under LG admin, a change which could not happen in last 70 years: Talat Parvez
Comment