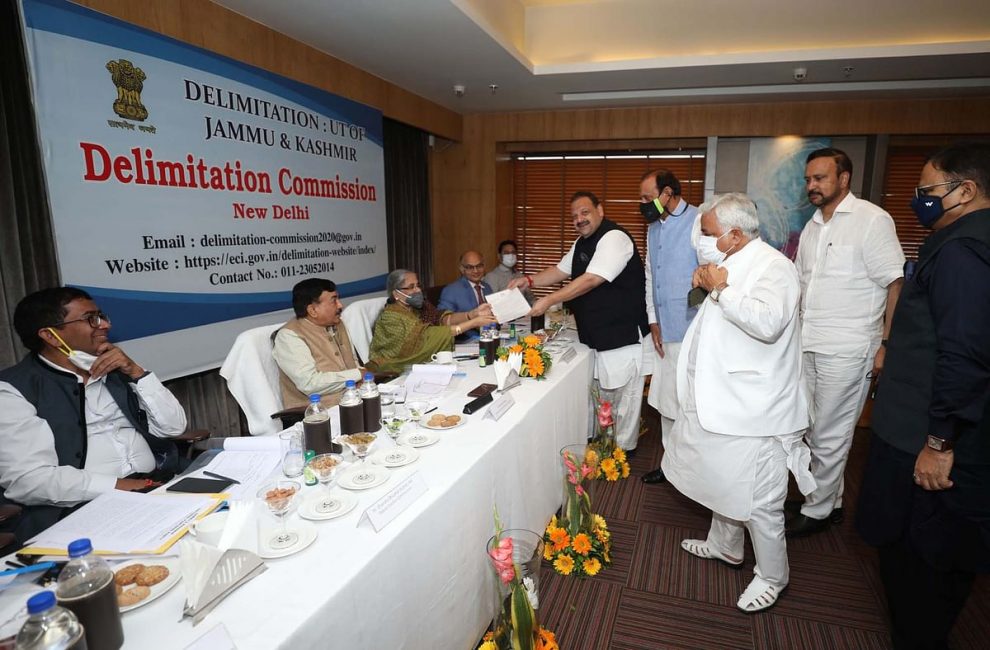 Zafar Choudhary
Add Comment
Eagerly being searched by the political leaders and general public alike the new map of the Assembly constituencies has yet to be made public. What all we know so far is the scaling up of number of Constituencies from 37 to 43 in Jammu region and from 46 to 47 in Kashmir region.

Jammu: The draft proposal of the Delimitation Commission carving out new Assembly Constituencies has kicked off a row with major regional political parties rejecting the distribution of new seats.

There is massive outpouring of anger across Kashmir Valley as Jammu region has got away with six of the seven new seats despite the latter’s population lesser by 1.4 million from the former.

Eagerly being searched by the political leaders and general public alike the new map of the Assembly constituencies has yet to be made public. What all we know so far is the scaling up of number of Constituencies from 37 to 43 in Jammu region and from 46 to 47 in Kashmir region.

The House of undivided Jammu and Kashmir Assembly had 87 seats for direct elections and two to be filled by way of nomination. However, the nominated members didn’t have right to vote on the floor majority for formation of government because the nomination would be done upon formation of the government.

Upon bifurcation of the erstwhile state, the slicing out of Ladakh region with four seats left Jammu and Kashmir with 83 seats in the Assembly. As a part of the same event, the Reorganisation Act of 2019 granted seven more seats to Jammu and Kashmir and proposed a Delimitation Commission for further distribution of new and redrawing of existing Assembly Constituencies.

The Delimitation Commission under Justice Ranjana Prakash Desai came to be constituted in March 2020 with a year-long term which was further extended by another year. Even as a quasi-judicial body, the Delimitation Commission has been seen with suspicion, mainly by Kashmir based political parties, by accusing it of favouring BJP’s political agenda. Such allegations have come out more sharply since yesterday.

In the erstwhile Assembly, Jammu region had 37 seats while the Kashmir Valley had 46. A difference of nine seats made the regional differences sharper election after election. The Jammu region, particularly the Tawi basin catchment, has since the time of Praja Parishad agitation been asking for parity in distribution of Assembly seats, a demand vehemently rejected by Kashmiri political leadership suggesting population as the reason. All the previous Delimitation exercises have allocated more seats to Kashmir than to Jammu.

The reading down of Jammu and Kashmir’s special status was not just striking down of a law but a long term process involving governance, law, politics, society, culture and economics to reduce Kashmir Valley’s political dominance in the political discourse of Jammu and Kashmir. A Delimitation on the basis of 2011 Census would have ended up giving Kashmir 51 seats and Jammu 39 seats, this further widening the numerical gap in politics.

Ever since the August 2019 developments, the demand for increase in seats in Jammu region has been stronger than ever before. But the population statistics, a key factor in Delimitation, didn’t favour Jammu’s demand.

After their last visit to Jammu and Kashmir, the Delimitation Commission chairperson is on record having said that the panel received strong demands from Jammu for increase in number of seats. “There is strong sentiment for more seats”, the Commission had said at a presser.

The final outcome of the Delimitation has sprung massive surprise by giving away six of the seven new seats to Jammu region. This is despite the fact that as per 2011 Census Jammu’s population is lesser by around 1.4 million than Kashmir’s. The Commission’s proposal leaves an average population of 1.25 lakhs per Constituency in Jammu region while 1.45 lakhs in Kashmir Valley.

To overcome this imbalance, the Commission adopted the unique criteria which has rarely been known before. The Commission has accorded primacy to difficulties caused by shelling and firing along the border from Pakistani side and the general difficulty of life because of topography and remoteness -both factors favouring Jammu region.

The only new seat that has gone to Kashmir Valley is in Kupwara district, which qualifies both for being with the LoC and also the general difficulty of life.

The Commission has asked its associate members -five Members of Parliament from Jammu and Kashmir -to submit their feedback by December 31.