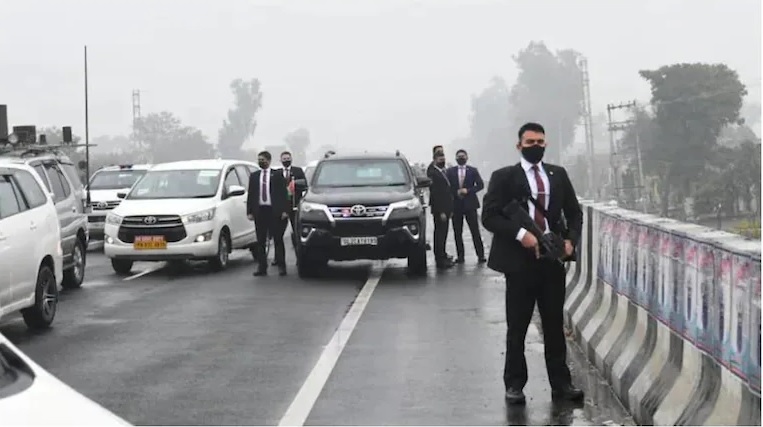 PM Narendra Modi was on a one-day visit of Punjab on January 5th this year in connection with a rally in Ferozepur. He was expected to address the rally organised by the local unit of BJP there.

It was supposed to be the beginning of the election campaign of BJP in Punjab. In spite of the political nature of the visit, the PM’s tour is always guided by a security protocol defined by law, usages, practice and past experiences strictly.

There is no doubt in the fact that the personal security of the PM of the country falls within the domain of the elite security institution created for the purpose, the Special Protection Group (SPG) but the overall security related issues during the visit are the subject matter of the state/UT administration that the PM is visiting. It is the respective state’s responsibility to provide a green corridor to the PM’s convoy during its entire period of visit in that particular state.

The constitution of the country makes our Prime Minister a multifaceted constitutional personality. Besides being the leader of a particular political party or a group of parties, he is the leader of the nation as the head of the duly elected government at the centre. His security issue has no political angle whatsoever since his position is above political partisan as the head of the government and the leader of the nation. Therefore, it is the responsibility and the obligation of the respective state government to be in close touch with the security related apparatus of the PM, Union Home Ministry and the PMO. Any failure on its part to observe its constitutional responsibility in this regard is being viewed as a very serious matter that should invite thorough probe and investigation.

In case of the PM’s Punjab visit this time, some serious and threatening events took place while he was on his way to the venue. The Prime Minister, Narendra Modi was stranded on a flyover near Talwandi, Punjab for 15-20 minutes after ‘farm protesters’ blocked the route of his cavalcade while he was on his way to the National Martyrs Memorial at the Hussainiwala border with Pakistan. It needs to be mentioned here that the PM’s convoy was stranded on the flyover for 20 minutes that has a direct distance of ten km from the Pakistan border. The PM’s cavalcade is not supposed to stop anywhere in between in any case. It should keep on moving up to the time it reaches its destination where generally a ‘bandobast’ as per the laid down protocol and guidelines remains in place.

As the Prime Minister cancelled a scheduled programme in Ferozepur, he was to lay foundation stone for development works worth Rs 42,750 crore and also address a rally, and headed back to New Delhi, the Ministry of Home Affairs said, “taking cognisance of this serious security lapse, sought a detailed report from the Punjab government and asked it to fix responsibility for this lapse and take strict action”.

Unfortunately, the Congress government in Punjab has set itself on a collision course with the centre on the issue. Signalling that there would be consequences for not securing the route of the Prime Minister’s cavalcade, the Ministry of Home Affairs has sought a detailed report on the security breach in Punjab. Amit Shah’s tweet on the issue categorically said, “Such dereliction of security procedure in the Prime Minister’s visit is totally unacceptable and accountability will be fixed.”

“The Prime Minister was stuck on the flyover for 15-20 minutes. This was a major lapse in the security of the Prime Minister. The Prime Minister’s schedule and travel plan was communicated well in advance to the Punjab Government. As per procedure, they have to make necessary arrangements for logistics, security as well as keep a contingency plan ready. Also in view of the contingency plan, the Punjab Government has to deploy  additional security to secure any movement by road, which were clearly not deployed. After this security lapse, it was decided to head back to Bathinda Airport,” it said.

News agencies reported that on reaching the Bhatinda airport, the Prime Minister told the senior officials of the state (sarcastically), “Apne CM ko thanks kehna, ki mein Bathinda airport tak zinda laut paaya (Thank your CM, tell him that I managed to get back alive to Bathinda airport).” There has been a general outcry on the issue. While the leaders of the Congress are divided on the issue, some calling git a “drama by the PM Modi” and the others asking for a “thorough investigation of the issue”, the leaders of the BJP and some other parties have termed ‘Congress-made happening in Punjab as a trailer of how this party thinks and functions. Repeated rejections by the people have taken them to the path of insanity. The topmost echelons of the Congress owe an apology to the people of India for what they have done’, they said. The BJP charged the Charanjit Singh Channi led government accusing it of creating a situation “where the Prime Minister is brought to harm”.

BJP president J P Nadda, in a Twitter post, said: “The tactics used by the Congress government in Punjab would pain anyone who believes in democratic principles. The state police were instructed to prevent people from attending the rally. Large number of buses were stranded because of the high-handedness of the police & connivance with protestors.” He said “it is sad that the PM’s visit to launch development projects worth thousands of crores for Punjab was disrupted” but “we will not let such a cheap mentality hinder progress of Punjab”. The state intelligence agencies of Punjab had also conveyed to its government that one lakh people were expected to attend the rally for which a number of obstacles were created by the protesters and the police.

Kiran Bedi, the prominent IPS (retd.) called the misadventure as an ambush of the Prime Minister in Pubjab, in which the absence of top police and civil officers was noticeable. This is again a very serious observation by a person who has remained an expert of the security scenario for a long time. The seriousness of the case can be gauged from the fact that the issue has gone to the Supreme Court of India as well for an impartial investigation into the mess.

The moral of the story is that the Congress, unfortunately, hasn’t learnt any lessons from its historical blunders in Punjab nor from the security failures in case of the assassination of the two former PMs, Indira Gandhi and Rajiv Gandhi.  The statements issued by a number of leaders of Congress in this context are completely atrocious and hence reprehensible. However, the question remains as to whether the whole scenario was the result of a security lapse by the state government or a pre-planned conspiracy to expose the Prime Minister to a grave risk of life…! These questions will haunt every concerned citizen up to the time the probe and thorough investigation is done. It would be appropriate to wait for the report and ensure that the mistakes committed already are not repeated again to gain any sort of political millage.

Lohri : A reminder of what we have retained and what we have lost
Impact of melting glaciers on river system, food security
Comment