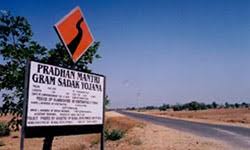 Jammu: In last 7 years, the project executing companies in Jammu and Kashmir has constructed 14053 kilo meter road under Pradhan Mantri Gram Sadak Yojana (PMGSY) with the expenditure of Rs 7661.45 crores.

“With the completion of these roads in past 7 years, 2187 schemes allotted under PMGSY were completed and 1957 habitations were connected,” an official told The Dispatch.

Recently, Jammu and Kashmir has ranked third among all States and Union Territories in implementation of Pradhan Mantri Gram Sadak Yojana (PMGSY) during the financial year 2020-21 with Udhampur district bagging top position at national level in terms of completion of road network under the scheme.

As on April 9, 2021, the J&K has completed more than 3000 kilometres of road length, which is 90.47 percent of the target length. Against the target of 3500 kilometres of road length and connecting 177 habitations, the Jammu and Kashmir Rural Road Development Authority (JKRRDA) has completed 3166.76 kilometres of road length and connected 119 habitations by completing 320 schemes with an expenditure of Rs 1633 crore.
This is the best ever figures of J&K in last five financial years in terms of achieving physical progress of roads under PMGSY. In the financial year 2019-20, the J&K had completed 214 schemes and connected 148 habitations by completing 1325.67 kilometres of road length by spending Rs 1324.12 crore.
Among all districts at national level, Udhampur district of Jammu Division has bagged the top position for achieving the target of road length. Udhampur district constructed roads of the maximum length of 560.49 km in 2020-21. Four more districts from Jammu and Kashmir have also figured in the list of PMGSY top performing 30 districts of the country. These include Rajouri (420.25 Km), Doda (335.71 Km), Kathua (297.79 Km) and Reasi (223.23 Km), all from Jammu province.