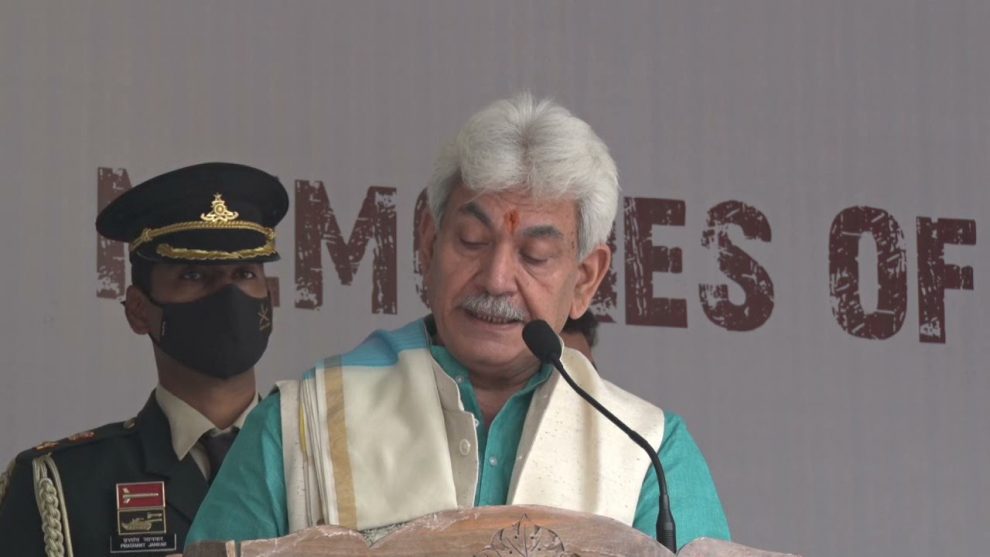 The Dispatch Staff
Add Comment
Someday back, I have requested the Prime Minister to preside over the groundbreaking ceremony of the launch of industrial investment to the tune of Rs 20,000 crore to Rs 25,000 crore. He has asked us to complete the formalities and expressed willingness to be among the people of Jammu and Kashmir to preside over the function by March, the Lt Governor said.

Jammu: Prime Minister Narendra Modi will preside over the groundbreaking ceremony of the launch of industrial investments worth 20,000 to 25,000 crore rupees here next month, Jammu and Kashmir Lt Governor Manoj Sinha said on Tuesday.

He sought cooperation of the people to the efforts of his administration to usher a new dawn of peace, prosperity and development under the leadership of Modi in the Union Territory.

Someday back, I have requested the Prime Minister to preside over the groundbreaking ceremony of the launch of industrial investment to the tune of Rs 20,000 crore to Rs 25,000 crore. He has asked us to complete the formalities and expressed willingness to be among the people of Jammu and Kashmir to preside over the function by March, the Lt Governor said.

Sinha was speaking at a function organized at Bajalta here to inaugurate 20 power projects completed at a cost of Rs 48 crore to provide better power supply to consumers in five districts of Jammu, Udhampur, Poonch, Rajouri and Reasi districts.

He said within the next one-and-a-half-year, two major projects will be completed to make Jammu and Kashmir self-reliant in the power sector.

He said the government land available with the industries department is being allotted to investors who have deposited the fee and submitted the detailed project reports and the process is likely to be completed by February 20 in the run up to the groundbreaking industrial investment ceremony.

A new dawn will usher in J&K under the leadership of Prime Minister the industrialists have shown their interest and a lot of jobs will be generated. We have made necessary changes in our laws while Rs 1 lakh crore worth road and tunnel projects are in progress to provide modern infrastructure, he said.

Seeking cooperation of all sections of the society, he said, You have to support the government efforts to make the atmosphere conducive. I assure you of economic development, progress and social justice.

He said the government is fulfilling the aspirations of all sections of the society and I am saying it with confidence that we are moving forward to ensure accountability, transparency and responsive administration.

Terming electricity a prerequisite for economic development, the Lt Governor said J&K has a lot of capacity for power generation which was not fully tapped over the years, while the distribution and transmission system was also in a very bad shape.

After I took over, we started work in a systematic way to improve distribution and transmission and also made attempts to tap resources for power generation with the whole hearted support of the central government. We have 3500 Mega Watt power available and by 2024, another 2500 MWs will be added, he said, adding that within the next one-and-a-half years, two major projects will be completed which will make J&K self-reliant in the power sector.

He said out of 128 sub-projects taken under Prime Minister’s Development Package to improve transmission and distribution system, 134 were completed and rest of the 54 are being completed by March end.

Sinha said his administration is making attempts to provide relief to the people of both the divisions of Kashmir and Jammu who used to suffer due to power outages during winter and summer.

However, the Lt Governor said his administration will have a sympathetic view of the condition of the poor and the farmers. PTI TAS AB