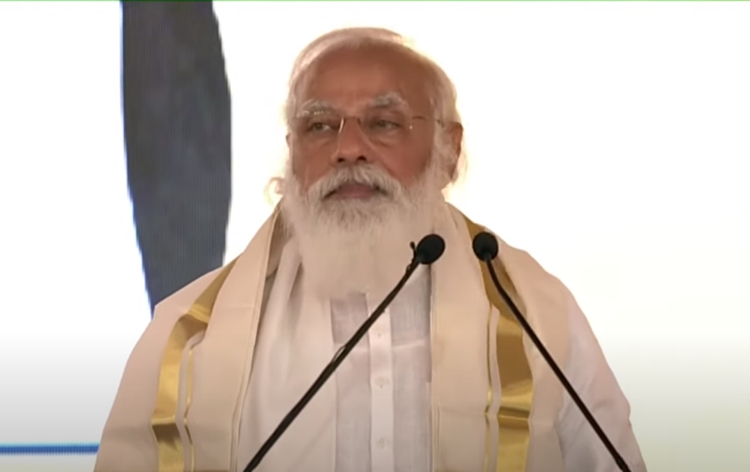 The Prime Minister said, India has the ability to rise to the occasion and contribute to the global good The Prime Minister also inaugurated country’s first full-fledged international cruise terminal, Sagarika at Cochin Port and Marine Engineering Training Institute of Cochin Shipyard Ltd.

Among the projects unveiled by the Prime Minister today include the Propylene Derivative Petrochemical Project of Bharat Petroleum Corporation.

Prime Minister also dedicated to the nation the Ro-Ro Vessels at Willingdon Islands in Kochi.  Ro-Ro service will benefit trade as a result of reduced transportation cost and transit time, and will also lead to reduced congestion on the roads of Kochi. Apart from this, the Prime Minister laid the foundation stone of the reconstruction of South Coal Berth at Cochin Port.

Mr Modi said, through the national infrastructure pipeline, 110 lakh crore rupees being invested. In this, special attention is being given to coastal parts, the North east and mountain areas. The Prime Minister said, India is today embarking on an ambitious program of broadband connectivity to every village.

The Prime Minister mentioned about the special focus given to Kerala in Union Budget by referring to the allotment for Kochi Metro Rail Project. Mr. Modi said that India is proud of its diaspora. He said, Indians working in the Gulf should know that they have the full support of the government.

While delivering his speech, the Prime Minister also focussed on tourism sector and urged startups to come up with innovative tourism-related products. He asked the young generation to promote local tourism by travelling to nearby areas. He also said that the Covid pandemic opened an opportunity before the tourism sector of the country.

Speaking on the occasion, Union Minister for Petroleum and Natural Gas Dharmendra Pradhan said that the projects will add special momentum to the growth of Kerala. All these projects would help to realise PM’s vision of Atmanirbhar Bharat.