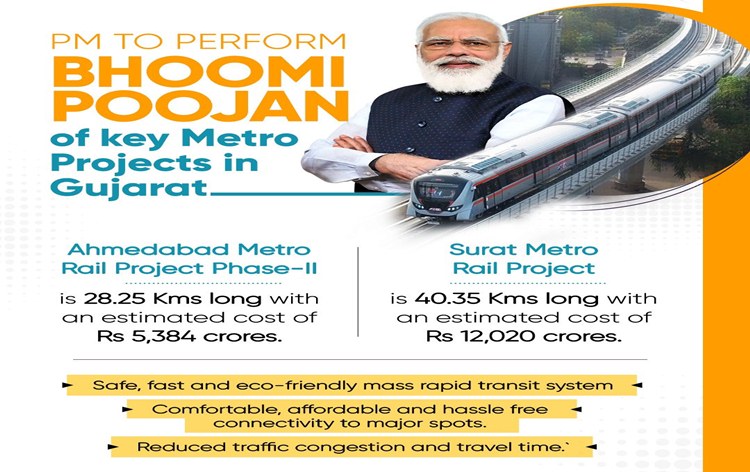 The length of Corridor-1 of phase-II is 22.8 kilometers from Motera Stadium to Mahatma Mandir which is a completely elevated corridor. This will comprise 20 state of the art elevated Metro Stations with interchange facility at Koteshwar Road for future provision to connect Sardar Vallabhbhai Patel International Airport. The length of Corridor-2 is 5.4 Kilometres from GNLU to GIFT City with 2 elevated stations, having interchange facility at GNLU and a bridge over Sabarmati River.

Surat with a population of around 60 lakhs is the fastest growing city in India. The city has no Mass Rapid Transportation System, thus the center and Gujarat government have decided to provide MRTS facility in Surat. Phase-I of Surat Metro Rail Project, with a total length of 40.35 kilometers comprises two corridors. Length of Corridor-1 is 21.61 kilometres and Corridor-2 is 18.74 kilometres. The Corridor-1 is from Sarthana to Dream City, which comprises 14 elevated stations and 6 underground stations with a depot at Dream City. The Corridor-2 is from Bhesan to Saroli, which comprises 18 elevated stations with a depot at Bhesan. The estimated completion cost of Surat Metro Rail project is 12,020 crore rupees.

The foundation laying ceremony of Ahmedabad Metro Rail Project Phase-II will be held at Mahatma Mandir – Gandhinagar, and that of Surat Metro Rail Project at Diamond Bourse Dream City, Surat. AIR correspondent reports, the center and Gujarat government have decided to create a major infrastructure for urban transportation in Ahmedabad- Gandhinagar and Surat to reduce traffic congestion, pollution, carbon emission and travel time.

To implement these objectives, Gujarat Metro Rail Corporation -GMRC- Ltd- a Special Purpose Vehicle was set up with the objective to provide safe, fast and Eco-friendly rail based mass transit services to the public at affordable cost.

The two Metro Projects will provide an environment friendly ‘Mass Rapid Transit System’ to these two fastest growing cities. Ahmedabad Metro Rail Project Phase-II is an extension of Ahmedabad Metro Rail Project Phase-I connecting Ahmedabad and Gandhinagar. The total length of phase-I is 40.03 kilometres, out of which, one stretch of 6.5 kilometres is operational from March 2019. The remaining stretch of 33.5 kilometres is expected to be completed by August 2022.