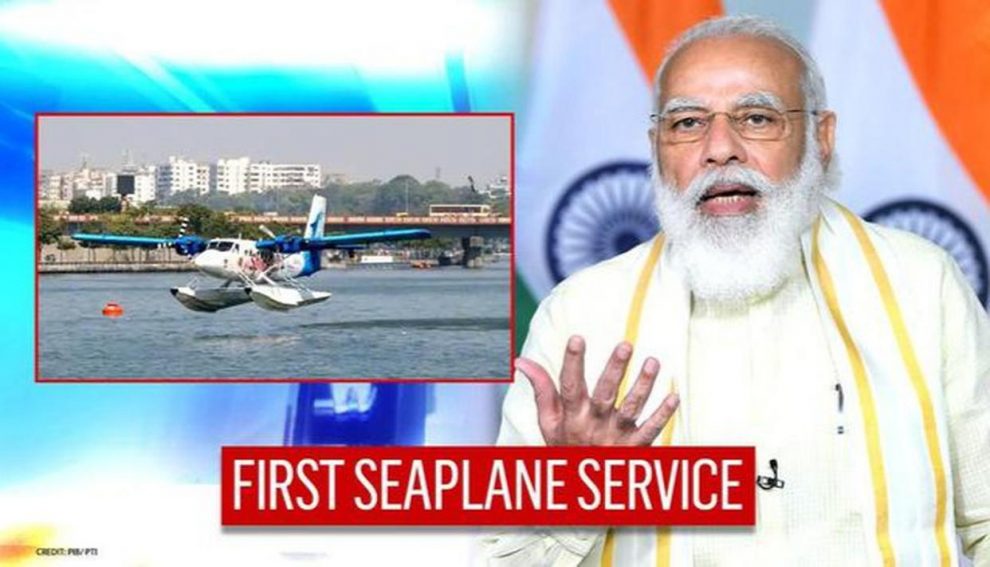 Prime Minister Narendra Modi will inaugurate the first seaplane service in Gujarat to the people from October 31, sources in the Shiping Ministry Sources said on Tuesday.The Prime Minister will take the official inaugural flight on October 31. The first flight will take off from Sabarmati Riverfront in Ahmedabad to the Statue of Unity in Kevadia Colony in the Narmada district.
According to a release from the Defence wing, the seaplane, which will be operated by SpiceJet, is a Twin Otter 300 and registered in the name of Spicejet Technic.

The major difference between an airplane and the seaplane is between their methods and capacities of takeoff and landing.
An airplane’s take-off and landing is from the land, while the seaplane can make take-off and land on any large water body – sea, river or lake.
The Shipping Ministry sources further told ANI that the Twin Otter seaplane which arrived at riverfront in Ahmedabad weighs 3,377 kilograms. Its fuel tank has a capacity of 1,419 liters. The Seaplane has a length of 15.77 meters (51 feet) and a height of 5.94 meters (19 feet), and it can fly carrying a maximum weight of 5,670 kg. Its seating capacity is 19 passengers.

According to Captain Ajay Chauhan, “This machine (Seaplane) is having twin engines of PT61-32 type with single-stage free turbine. The seaplane consumes 272 kg of fuel per one hour of flying. The major technical difference between the airplane and seaplane is during their takeoff and landing operations; the former gets the assistance of a computerized control system, while the latter has a manual system for all the operations.”
“Secondly, the seaplane flies at a very low height, compared to other commercial flights. Its takeoff and landing operations demand more skill from the pilot as its operations have to be carried out from a liquid (water) surface,” he added.

On March 28, 1910, Frenchman Henri Fabre flew the first successful powered seaplane, ‘The Gnome Omega–powered hydravion, a trimaran floatplane. The seaplane is also known as ‘A Flying Boat’.
In September 1919, British Company, ‘Supermarine’ started operating the first flying-boat service in the world, from Woolston in England to Le Havre in France.

In 1930s, as a swifter transport mode, the use of seaplane had become popular in America and Europe. It had also opened-up new transport horizons among South America, Africa, and Asia. Due to seaplane, the postal services between England and Australia had become very fast with taking only 16-day.
During World War II, the military value of flying boats was well-recognized, and every country with a coastline operated them in a military capacity at the outbreak of the war. During World War II, the largest and heaviest flying boat (seaplane) the Blohm & Voss BV 238 was built by Germany.