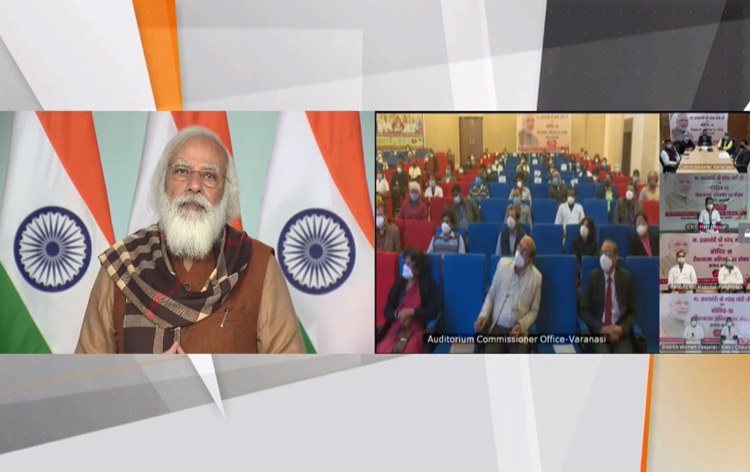 Prime Minister Narendra Modi says, world’s largest vaccination drive underway in the country, is making India Atmanirbhar. The Prime Minister was speaking while interacting with beneficiaries and vaccinators of Covid-19 drive from Varanasi via video conferencing.

Mr Modi thanked beneficiaries and vaccinators of Covid-19 for instilling confidence in people regarding India’s vaccination programme. The Prime Minister said Covid warriors played a major role against the pandemic.

Prime Minister said that they have taken a definitive step by inoculating themselves in the first phase of vaccination drive. He highlighted that it is important for the healthcare workers to vaccinate themselves as it will help them function without any fear.

Prime Minister Modi also reiterated that granting emergency use approval for vaccines is not a political decision but a decision that has been taken after several rounds of discussions with doctors and scientists. He also asked people not to harbour any fear in their minds regarding the vaccination process and should fearlessly get themselves vaccinated once their turn arrives.

During the interaction many beneficiaries said they felt comfortable and did not have any problems at all.

Earlier Mr.Modi tweeted that the interaction will be a first-hand opportunity to hear the experiences of beneficiaries as well as feedback as the world’s largest vaccination drive is underway in India and front-line warriors are getting vaccinated.

Prime Minister’s Office said that Mr. Modi’s interaction in his parliamentary constituency of Varanasi follows his continuous dialogue and discussion with scientists, political leaders, officials and other stakeholders to proactively ensure smooth conduct of the world’s largest vaccination drive.

The interaction comes as over a million health workers have now been vaccinated, with over 230,000 getting doses yesterday alone. The government data shows there has been an increase in daily immunizations. According to the University of Oxford’s Our World in Data, India is now the fastest country to breach the million mark, taking only six days compared to nine by the US.

PM Modi launched the inoculation drive on January 16 with over 300 million front-line workers prioritised to get the jabs first.