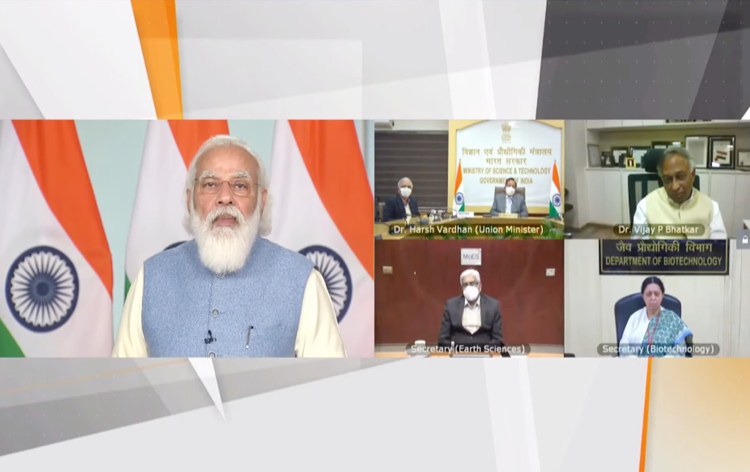 Prime Minister Narendra Modi has said that Indian scientists have done path-breaking research and the Indian tech industry is at the forefront of solving global problems.

He said, India has a rich legacy in science, technology and innovation and all our efforts are aimed at making India the most trustworthy centre for scientific learning.

At the same time, Government wants the scientific community to share and grow with the best of global talent.

He asserted that the New National Education Policy will help in fostering scientific temper from an early age.

The Prime Minister said now focus has shifted from outlays to outcome, from text books to research and application.

Mr Modi emphasized the importance of making the benefits of  science and technology to all.

He said, Science and technology is connecting the poorest of the poor with the government.

He said, with digital advances, India is becoming a centre of evolution and revolution of global high-tech power.

The Prime Minister said there are many challenges in our country like water scarcity, pollution, soil quality, food security, for which modern science has a solution.

He said, science also has a big role in rapidly exploring the water, energy and food resources in the sea.

Mr Modi said India is running Deep Ocean Mission for it and has achieved success.

The Prime Minister said reforms have now been undertaken in the Space Sector to encourage the youth and the private sector to not only touch the sky, but also the heights of the deep space.

The Prime Minister said, what is called science today, becomes the technology of tomorrow and an engineering solution later.

He said for attracting good talent into the science domain, the government has announced scholarships at various levels, but it needs a big out-reach from within the science community as well.

The Prime Minister gave a clarion call to the global community to invest in Indian talent and innovate in India.

He said, India has the brightest minds, and celebrates a culture of openness and transparency.

The Government of India stands ready to address any challenge and improve the research environment.

He lauded the scientist for keeping India ahead and in a better position in the fight against Corona.

Science and Technology Minister Harsh Vardhan was also present on the occasion.

Ministries of Science and Technology and Earth Sciences in association with Vijnana Bharati conceptualized the IISF to promote scientific temper in the society.

Launched in 2015, the aim of IISF is to engage the public with science, celebrate the joy of science and show how science, technology, engineering and mathematics can provide solutions to improve lives.

The goal of the IISF 2020 of the 4-day long festival is to help youth develop 21st century skills, with a focus on scientific knowledge, creativity, critical thinking, problem-solving, and teamwork.

A long-term objective is to encourage students to study and work in scientific fields.