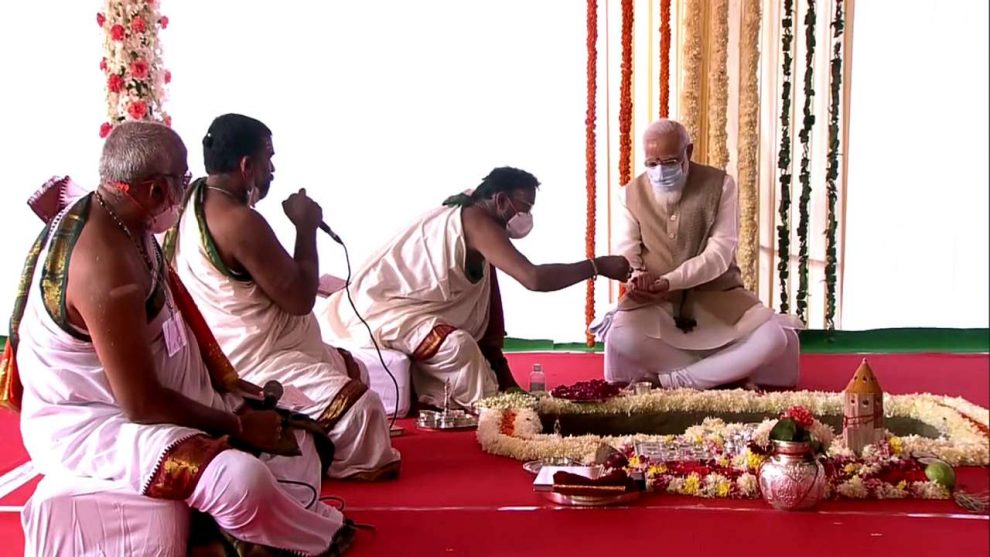 Prime Minister Narendra Modi laid the foundation stone of the New Parliament Building in Parliament House Complex on Thursday.
Tata Trusts’ Chairman Ratan Tata, Union Minister HS Puri, Deputy Chairman of Rajya Sabha Harivansh and various religious leaders were also present at the event.
Tata Projects Ltd has been given the contract for the project.
Among other leaders, Union Home Minister Amit Shah, Defence Minister Rajnath Singh, Union Minister Ravi Shankar Prasad, foreign Envoys and Lok Sabha Speaker Om Birla also attended the ceremony.
Prime Minister Narendra Modi unveiled a plaque to mark the foundation stone laying ceremony of New Parliament Building.At 2:15 pm, Prime Minister Narendra Modi is scheduled to address the gathering on this occasion.
According to a release by the Prime Minister’s Office (PMO), the new building is an intrinsic part of the vision of ‘Aatmanirbhar Bharat’ and will be a landmark opportunity to build peoples’ Parliament for the first time after independence, one which will match the needs and aspirations of ‘New India’ in the 75th anniversary of independence in 2022.
“The new Parliament building will be modern, state-of-the-art and energy-efficient, with highly non-obtrusive security facilities to be built as a triangular-shaped building, adjacent to the present Parliament. Lok Sabha will be three times of the existing size and Rajya Sabha will be substantially bigger,” the release said.
The interiors of the new building will showcase a rich blend of Indian culture and diversity of our regional arts, crafts, textiles and architecture, it said.
As per the PMO, the design plan includes space for a magnificent Central Constitutional Gallery, which will be accessible to the public.
It said the construction process will use resource-efficient green technology, promote environment-friendly practices, generate employment opportunities and contribute towards economic revitalization.