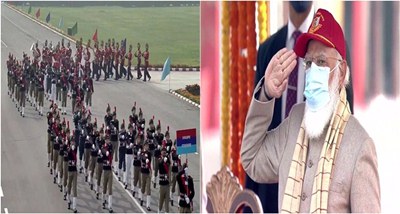 Prime Minister Narendra Modi has lauded the role of National Cadet Corps (NCC) in the service of the nation adding that from floods to any other natural disasters, the cadets have helped the people during such calamities.

Addressing the NCC Rally in New Delhi today, he said, during the COVID-19 period, lakhs of cadets worked with the administration and society across the country. Mr. Modi said, the country has seen effective results of people taking their responsibilities during COVID and India fought the pandemic well due to their efforts.

Mr Modi said, around one lakh NCC cadets are being trained by Army, Navy and Air Force for a new responsibility in nearly 175 districts in the coastal and border areas of the country.The government has made efforts to see that the role of NCC Cadets is further expanded. He said, with a view to strengthen the security network in the border and coastal areas, the participation of NCC is being boosted.

Mr Modi said, the government has increased the number of firing simulators from one to nearly 100, micro-light flight simulators from five to 48 and rowing simulators has to been increased from 11 to 60. He added that these modern simulators will improve the training qualities of NCC. He said, NCC has seen a 35 per cent  increase in the number of girl cadets and every front of country’s defence forces are being opened for females. He said, India’s strong daughters are ready to battle it out against the enemies and India needs their bravery.

The Prime Minister further said that India will soon be known as a producer of defence equipment, instead of being a market as it is today. He said, the country has also received three more Rafale fighter jets  from France and they have the ability to refuel mid-air, which has been done by India’s friend UAE, helped by Greece and Saudi Arabia. Mr Modi said, this is a portrayal of India’s strengthening friendship with middle-east countries.