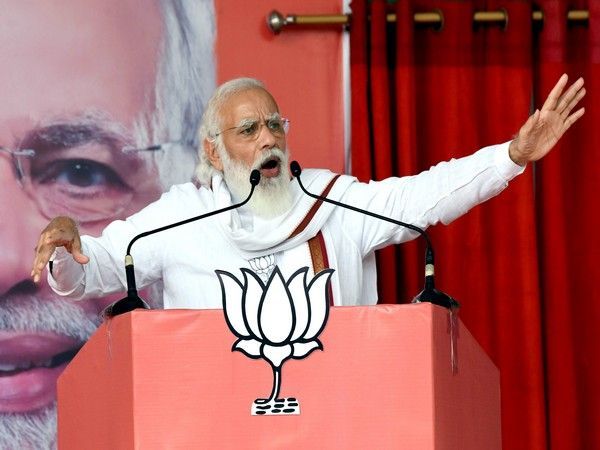 Prime Minister Narendra Modi on Tuesday lauded BJP victory in Assembly bypolls of several states and expressed gratitude to people for reposing faith in the party.On BJP’s victory on 19 seats out of 28 in Madhya Pradesh bypolls, he thanked people of the state for blessing the party.”Powered by the progressive agenda of the Government under Shivraj Singh Chouhan and the hardwork of BJP Madhya Pradesh, our Party has emerged as the unparalleled choice of the people. I thank the people of MP for blessing BJP in the by-polls held across the state. Their affection is invaluable,” PM Modi tweeted.

BJP won 6 out of 7 Uttar Pradesh Assembly seats where polling was held on November 3.
Speaking on this, the Prime Minister said that the pro-people policies of the Centre and Uttar Pradesh Government under Yogi Adityanath have endeared the party to the citizens.”In Uttar Pradesh, the pro-people policies of the Centre and UP Government under Yogi Aditynath ji have endeared our party to the citizens. They have given unequivocal support to the BJP, for which I express gratitude. I also appreciate the good work of the BJP Uttar Pradesh unit,” PM Modi tweeted.

“I thank the people of Manipur for once again reposing faith in the development agenda of BJP! Congratulations to BJP Manipur for the phenomenal wins in the by-polls. These victories will strengthen the State Government under N Biren Singh Ji and help fulfil people’s aspirations,” he tweeted.In Manipur, BJP won 4 out of 5 seats which went to bypolls this month.
The Prime Minister said that BJP’s win in Telangana’s Dubbak is historic and lauded efforts of party workers.

“I thank the people of Dubbak for blessing BJP Telangana. This is a historic win and gives us strength to serve the state with greater vigour. Our Karyakartas worked very hard and I laud their noteworthy efforts in furthering BJP’s development agenda,” he tweeted.
The Prime Minister said that BJP’s poll victory in Rajarajeshwarinagar and Sira reaffirms the people’s unwavering faith in the reform agenda of the Centre and State Government under Chief Minister BS Yeddiyurappa.

“The BJP Karnataka’s victories in Rajarajeshwarinagar and Sira are extremely special. It reaffirms the people’s unwavering faith in the reform agenda of the Centre and State Government under BS Yeddiyurappa Ji. I thank the people for their support and laud the efforts of our Karyakartas,” he said.
BJP won both seats which went to bypolls in Karnataka.